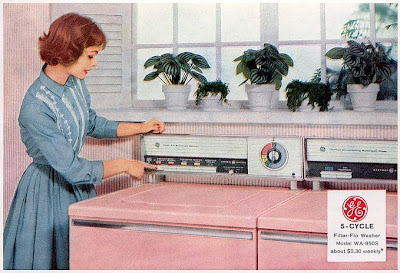 the only time in my adult life that i've ever had a washing machine was six months in the summer/fall of 2005, when donovan and i were living together.

it was this bizarro situation where the washer was on wheels and you'd have to drag it across the kitchen and hook it up to the kitchen faucet, let it run, then drag it all the way back.

we were living at the gilmore then. it was old and had creaky wooden floors. the entire apartment shook when that washer was running. it was like sitting in a shoddily built tree house during a wind storm.

in retrospect, i'm surprised i have no photos of this washing machine. it was that big of a deal.

well, now i see it as a big deal. maybe it wasn't such a big deal at the time because i didn't know that it would be several eternities before i lived in an apartment with a washing machine again. in apartments in cities (in america, at least), they're that rare.

in chicago, it honestly never occurred to me to identify a washing machine as an amenity i would like to have in an apartment, because no apartment that had one would've been remotely near my price range.

and so i've not had a washing machine again until now. until this temporary situation in the bottom floor apartment in the home of the russian family.

small as my flat is, there's a washing machine tucked into the corner, under the fridge and adjacent to the awkward under the sink space.

at the risk of seeming a total simpleton, i am still completely perplexed by this machine. there are so many buttons! it looks so complex!

hell, even the laundry detergent aisle at tesco was a veritable minefield of uncertainties. the word "detergent" appeared on nothing. all the fabric softner looks like detergent. all things i mistook for detergents were stain removers. finally i settled on "colour powder," a cleaning agent that i'm still not 100% convinced is detergent.

to say nothing of the machine itself.

there are THREE bins for powders/fluids. detergent and fabric softner i get, but what- pray tell- could the third slot be for? is there some other laundry agent about which i know nothing?

there are twenty cycle options and ten temperatures, all of them in celsius.

you guys, i have to select a velocity.

there's so much room for bad choices. apparently i made many.

about two hours into my first effort at washing a load of laundry, i realized that the "time saver" cycle (an option i'd entirely overlooked in the midst of all the other buttons) is probably going to be my new best friend.

Email ThisBlogThis!Share to TwitterShare to FacebookShare to Pinterest
filed under: laundry in the UK

Bleach, my love. Bleach is the third agent.

And I feel for you. I grew up without a washer/dryer in our apartment and my mom still treks down flights on flights on flights of stairs to wash. Now that I own my own machines (because I live in a reasonable housing market), I don't know if I can ever go back. But let me tell you, the fact that I own appliances still freaks me out.

Godspeed, Oline. And that can double as your velocity, too.

Ok, my friends in Germany have washer/dryers (and one has a laundry room!) but a couple of them are that weird under the counter contraption. One is a dual washer/dryer but it doesn't really dry the clothes. It just spins them around really fast and permanently wrinkles garments. Avoid that setting.