4 a brief message from the vieve 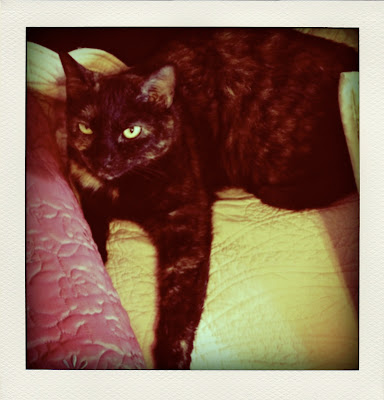 this here is a rather flattering pic taken by grandebo this morning and sent to my oline as a cruel reminder that i'm now living in the poshest comforts (copious throw pillows! duvets! oh my!) and that my life remains sadly unshattered by her absence.

i don't mean to sound vain there, but let's be real. this pic IS flattering. it really caters to my angles and brings out the green in my orange eyes. oh, and don't get me wrong- i do miss my oline. that's why on her very last night in memphis, after ten days of refusing to do so, i deigned to climb up and sleep at the end of her bed so that she couldn't move her feet all freaking night. love, people. LOVE.

so yeah, i'm back in memphis. where i was maybe born. we're not sure. i led a scandalous life pre-oline and mostly blocked it out.

yeah, yeah, there's this stupid cujo dog i have to deal with now, which kind of sucks, but for the most part i'm cool. being the grandcat rocks. the grandparents and i have invented this fun game we play where they open the door to let cujo out and i race past him out into the yard.

they spoil me real good here. i get treats without getting brushed. i get to stand on the kitchen counter and eat loaves of bread. i get a piece of cheese every morning and can play the piano during the night. soon i'll be a musical genius!

no way i would've gotten away with that shit in oline's house.

well, TTFN. it's time for treats!

as debo's autocorrect would say: love you, bitches.
the vieve
by oline

New idea: a blog from the perspective of Vieve, Slinky, and Ellie.

that would totally best OitC in the ratings.

Can you imagine? Libby, get in here!