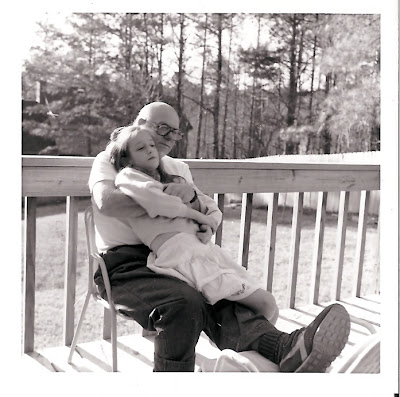 sometime in the late 80s/early 90s, there was this hurricane. it was in texas.

i'm not even attempt to pin down what hurricane this could've been. and it could've even only been a tropical storm. all i know is that we were living in either memphis or atlanta and joe called me on the phone and mentioned the hurricane and the whole entire world ground to a stop as i asked, "what hurricane?"

even at that age, i did not like secrets. i did not like that, presumably, my entire family had known about this hurricane in texas and i did not. worse, NO ONE HAD THOUGHT TO TELL ME.

dear all biographers in the world, as a child, were you like this? did you care this much? am i so weird because i did?

i didn't know about that hurricane in texas until it was over. until joe called and mentioned it in passing. had he not done so, i might've never known.

even at that age, the idea that things could be unfolding in the world that i might never know about was simply intolerable. thank god joe mentioned it.

believe you me, everyone in my immediate family has since come to wish he hadn't. were they able to travel back in time and rectify their mistakes, i'm pretty sure telling me about this hurricane this would rank somewhere between 1 and 5.

because i have lorded it over them for years. as lady catherine dubourgh said, "i must have my say in the conversation." but it's not so much that i need to have my say, as i need to know.

I NEED TO BE INFORMED.

this is apparently a deep seated personality trait. if i don't know, if you've not told me whatever, i assume it has been purposefully kept from me.

like, we will still be friends, but i will always remember that you left me out. that you kept that from me. that you did/thought/knew something without telling me.

(btw, this is a super attractive quality.)

this comes back to the whole three-person family thing, i think. we're a small family. we should all know all things. about each other, and about the weather patterns of the south.

except that really isn't possible, even at all.

joe's birthday was on december 13th.

you guys, i totally forgot this. because i'm moving to london and because i had 2.5 martinis on the night of the 12th and quit my job on the 14th. and because i didn't open my planner once from the 11th thru the 17th.

"i forgot and nobody reminded me," i told him. "it's just like that hurricane!"

and he not only knew exactly what i was talking about, but also agreed.

the whole family kept joe's birthday from me! joe and i are such victims! victims of birthday withholding!

such a ghastly crime.

and just like that, i turned it around on my whole family. and he let me, his voice tinged with bemusement. the assurance of having known me for all my life, of having been there at my birth, of having held a five pound version of me in his hands, of knowing that he has always been and will always be tied with my father as the most extraordinary man i have ever and will ever know.

he let me manipulate the situation. so that i had not failed him. so that, instead, it was they who had failed us. our entire family.