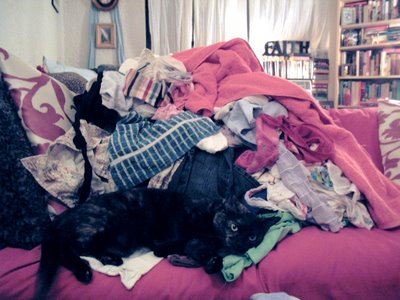 and i don't really know why since i haven't managed to accomplish anything in recent memory. instead i've written notes of things to be accomplished, taped them to the wall and tried not to feel their condemnation every time i cast a mournful glance their way then promptly do something else. post-its can be a judgemental crowd.

today, i actually had the thought: have i cleaned the litterbox this month?

for a bit of context, this is not at all disgusting because the vieve has the hygeine habits of an angel. her littery needs are most often tended to once a week, sometimes every other. and between her supernatural tidiness and my general aura of vanilla, diet coke and yellow, our home is an aromatic delight. but still. the litterbox should be cleaned. and wondering if you've cleaned it once in the month on the 18th day of said month? that's a little too grey gardens for comfort.

i'm not sure that i've done laundry this month either, which is a good indicator of how frightfully many clothes and linens i have. at this point though they've pretty much all been worn and used. even the sock drawer is getting skimpy. perish the thought- the sock drawer! a place ordinarily brimming with a bounty of glorious mismatchedness.

yesterday i was forced to take the tricky toesock/kneesock route. my left foot has never been so overstimulated. my right has never been more bored. how the dougO does this on a regular basis, i know not. it almost stirred me enough to do laundry. which is perplexing since i love doing laundry and ordinarily need not be stirred. the restless, slave-to-the-wage-oline apparently needs vigorous stirring to be roused from housekeeping habits most often native to college freshmen boys.

some time ago, worn out by various dramas and restlessnesses, i made a pledge to live in Love, Not Fear. because everyone always seems to be so afraid of everything and that's not good enough for me. so Love! Not Fear! i enthused. turns out, this was a lovely thought but a damn difficult thing to do.

fear involves staying exactly where you are, safely worrying and wondering, and peering into or averting your eyes from the unknown. it's very easy to get cozy there and though it catches up with you, it doesn't seem so scary in the long-run.

love involves pitching yourself into the unknown. and there's no way of getting around the scarifyingness of that.

i've been saying that we have done that. that i am now living in love and not fear. but i'll openly admit all i've been doing is striding bravely forward into a shopping addiction and brazenly embracing courageous clothing combos of polka dots and plaids. and i don't think that's quite what i had in mind. this was probably supposed to be a revolution of the heart, not the wardrobe.

the other day, as we were walking by the river on our way back from h+m, croftie said something about when we all leave chicago. my first impulse was to stop and stomp my foot and say NO. we must age here. and that would, of course, be a response made in fear. appalled by my inability to escape the dark side when i'm ostensibly an adherent of Love, i immediately forced croftie to swear on anne shirley that we would go adventuring in P.I.E. before we're thirty. because commitment to a canadian vacation within the next five years seemed like progress.

i think the problem with the Love Not Fear pledge is that i forgot to take into account that it's neverending. you can't pitch yourself forward and be content with where you land and stay there forever. you must keep pitching, keep going forward in both the smallest and biggest of steps.

if your job sucks, you have to find a new one. if you're afraid of moving, you've got to make yourself go. if you've written a book, you must get it published. if you want to dye your hair, you should. if you fear being anything but the pulled-together perfect girl, you've got to get over it. because if you don't make the pitch, you wind up too restless to do laundry and wondering when the litterbox was last cleaned. and that most certainly is not good enough.

there's a clem snide song called "i love the unknown." about a man who, afraid of feeling numb, ran away from love and loved only the unknown. i do not love the unknown. we're not even really on speaking terms. because i want to figure it out and know it, which is obviously in extreme conflict with its very unknownness.

but i think there's a balance, a place where maybe you love the fear too. or at the very least make peace with it. and the Love Not Fear seems to be gradually getting me toward that. so while i may not be ready and i may not have makeup on, the laundry's done, the litter box is clean and i am ready for whatever.
by oline