3 i tried to watch "the civil war" last summer. it was not the same.


a few words on the wawah 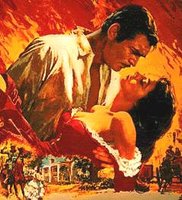 i've never been a civil war junkie. i mean, i grew up all over the south, loving southern belle paperdolls and gone with the wind, but though my family toured antebellum homes and battlefields, i was never into the war (... of northern agression). however, a suggestion a few months ago that the family watch spiderman 2 has led to a wee bit of a "craze"

somehow instead we wound up on a rampage through civil war dramas and documentaries: gods and generals (with the nutty, messianic stonewall jackson) led to ken burns' civil war (with the haunting music that had me internally hurrahing states' rights for weeks) which led to gettysburg (with some of the greatest quotes, gayest undertones, and worst facial hair to ever hit the big screen) which ultimately led to the shelby foote books (and ah! they were butternut clad).

my family is funny. when we get interested in something, we go all out.

this was during that month when i was living at home before moving here and my parents and i would rush home and frantically cook dinner so we could dine per bellum.

the war marathon became an excuse to trot out the southern accents in their full glory-- a lot of "mutheh deahs" and "wawah" talk. apparently we're related by marriage to the infamously incapable george mcclellan. thus, every time his wife was mentioned, knowing smiles flashed about the room.

unlike the starvation scenes in gone with the wind, during which i've always refrained from eating out of sympathy for scarlett having to choke down that nasty beet, this go-around with the war prompted no such abstention-- despite horrifying tales of cornpone and tar biscuits.

there we were watching gruesome pictures of corpses on the battlefields while chowing down on salads and brownies. one night my mum brought out a candle while my father made popcorn. the juxtoposition was disturbing and yet hysterical and incredibly typical of my family.

we're class. we take our carnage by candlelight.
by oline

naw, i wawant to wawatch but also wawant someone to make be brownies and light candles. the wawah demands mood lighting!