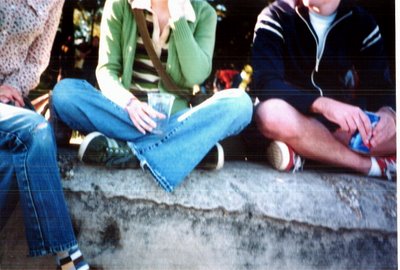 (and yes, this was just a shameless excuse to resurrect the shortie shorts photograph in homage to our beloved fallen comrades, the green and red shoes)
three years ago today (i think. because my mind is rusty and overmaphed i can't quite recall), an overwhelming majority of my readership (meaning 4 out of 7), first walked the hallowed halls of the university of chicago.

we've spent the past two weeks, in which new maphers were purchasing textbooks and dougo was regularly reporting back on how young and innocent they look, with our heads in our hands moaning i can't believe it's been three years. so a brief (written) revue seems warranted.

my first memory as a genuine mapher would be when jenny fair and i were walking across the quad to core class on a bright, beautiful, sunny, september morning and nearly ran smack into sir anthony hopkins. sir anthony in full make-up, wearing a track suit and drinking a frappacino from a bright pink straw. that really set the tone. distinguished but bizarre.

maph was kind of like going to war. or jail. we bonded. we bonded for life. because we sat in that stifling room, rustling papers, watching the jay and candice show. and some things will never be the same. eyebrows, for instance. not to mention social hours, ballerinas, freud, public intellectualism, the shedd aquarium, and jack black's body.

a lot of people complain about maph. it came with a hefty price-tag that we'll all be paying for some time to come. and the fact that the program's overlords publicly demean it's value doesn't help. but maph brought us many things, including nine months of reading, a year of affordable healthcare, and a lifetime subscription to the U of C alumni magazine, which is a source of endless dorktastic fun.

(and i'm not jesting on that last point. the months-long debate that raged over the removal of the alumni publications section from the print magazine to an online-only venue was the greatest literary smackdown of 2005.)

i think croftie, queen of the powerful summations, best summed up the maph experience, shortly after we, in formation and full grad-garb, ran the three blocks from the gym to the university gates. as the bagpipes stirred to life, croftie shifted her motarboard to a jaunty angle and, watching me stow a camera, wallet, program, and sunglasses in my sleeve, arched an eyebrow and said: so i guess this is kind of a big deal, huh?
by oline