4 6 years later, i stand by all of the statements expressed herein.

(in which oline takes to her fashion soap box...) 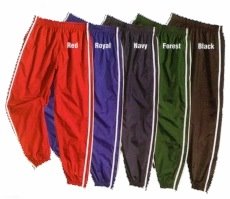 i realized the other day that windpants* are the official pant of chicago. and, of course, once you notice something, it's EVERYWHERE. walking to lunch on sunday, L and i encountered three windpanted couples in two blocks and had to continuously thread our way through windpanted crowds. is this a chicago thing? an urban phenomenon? the windpant was flagrantly absent from sex and the city.

windpants are essentially the shy cousin of bicycle shorts and the louder sibling ofsweat pants (which ironically tumbled in the heirarchy of workout chic to become representative of sloth and an inability to fit into one's other clothes). in my mind, windpants are very closely linked to hypercolor t-shirts as one of those kooky trends of the early 90s. in middle school the hallways literally echoed as windpanters swished their way to class. of course, that was the age of the windsuit. apparently someone decided along the way that an entire suit was excessive and from that point forward, windpants went it alone.

this all comes down to the cold hard truth that workout clothes simply should not be worn by people who are not exercising at that very moment. there's a window of windpant permissabiliy- before 10 a.m. and from 4 p.m. to 8 p.m.- when the wearer could conceiveably be headed to the gym. but windpants at 1 p.m., paired with a pink cable knit sweater, dress shoes and a clutch bag? there is no excuse.

when did this become socially acceptable? being entirely sexist, i can see that windpants would hold a certain jock appeal for guys. but girls? come on. in graduate school i was scolded for wearing dress pants to a meet & greet. in academia, i was told, ladies wear skirts. in real life, they apparently wear workout clothes. the windpant phenomenon makes even less sense because the windpant girls generally look aesthetically attuned. they have ooh la la hair, flawless eye makeup, designer bags and victoria's secret perfumes. it's as though they slaved to create a look and then took a detour and thought: "wow. windpants will really pull this together."

D was horrified in the dead of last summer when everyone rolled up their jeans to fashion makeshift capris. the city was a parade of hairy legs. maybe wind pants are a similar seasonal phenomenon. a freakish lapse in judgement for the sake of comfort in eratic weather. my fingers are crossed. down with the windpants. we'll take the hairy legs.

*and in the phrase "wind pants," i'm including the sorority girl black pants since their meshy material is clearly in the wind pant family. just because a pant comes in pretty pastel colors doesn't mean it's not windy.
by oline

reading this post about windpants (aka 'slishy pants') has really only succeed in making me 1. Want you to write out your thoughts on the yoga pants/spandex everywhere trend and 2. think about whistle britches. I realize that's a whole other kind of pants but I thought it and couldn't stop giggling.

HOW did i forget about whistle-britches?! so good. oh, matthew. this also ties into the whole leggings-as-pants/TIGHTS-as-pants phenomenon. gosh, one could make a whole career out of writing about pants.

I was totally rocking some leggings earlier. Here is the thing about leggings. They need to stop selling them in larger sizes. It just isn't good.

but i think also people need to size-up. even the string-bean depaul girls who live near me. if you're gonna wear them as pants then they shouldn't be skin tight. them's be's my thoughts. tights-as-pants = no excuse.