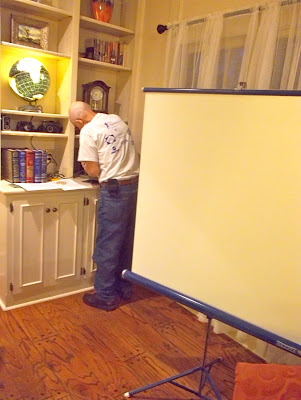 jean and lucy have brought uncle bill's projector and two rolls of 8 mm home movies that are believed to have been taken during the childhood of my dead first cousin twice removed.

fyi- that is maybe one of the most southern sentences you'll ever read.

joe is trying to work the projector. gary is helping by soliciting advice from online forums. they are both dreadful afraid of breaking the priceless family film.

it takes the first two hours of ABC's airing of the ten commandments (including commercials) for them to get the projector working.
burvil makes popcorn.

jean's wedding is 27 seconds long. the halloween party of my dead first cousin twice removed, then seven, lasts a solid minute and a half.

after those 117 seconds, we five sit there in the dark, the whir of the projector the only noise until the slap of the film reel's end.
and burvil says quietly, "the popcorn may not have been necessary."
by oline

my mother's cousin. so her cousin once removed for me. right? did i mess it up? freaking family trees.