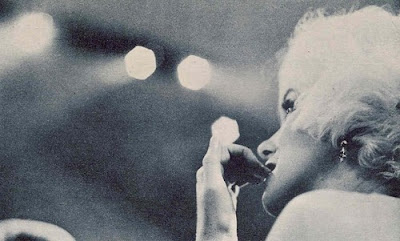 in 52 days, i'm presenting a paper that i've not yet begun to write.

it contains not one but TWO colons.

if you're at all familiar with the tendancies of upper-level undergraduates or university of chicago masters students, you'll rightly intrepret this as a clear sign that- when i pitched this paper- i had no idea what it was going to be about. accordingly, i larded it's title with voguish academic words and cliches that seemed rich with intellectual vigor when i was composing them and appallingly gauche in retrospect.

my abstract wasn't much better, as it merely shoved all this together into a buzzword smorgasboard. as though "adventure stardom" and "tabloid feminism" were bona fide concepts into which i will be delving (they aren't) and "jackie onassis" were the conduit to "the NEW woman" (is she?) and "the NEW woman" were a real thing (is it?).

given i've that mass of nonsense as a guide, i've put off the writing of this paper in characteristic fashion. meaning, i pulled 8 pages of information together during the last hour on the plane home from prague, and subsequently took a three-week break to recover from the strenuousness of that excertion. during which time, in every conversation with my mother, i've off-handedly confessed, "i really need to write that paper for paris", and to anyone who's inquired into the paper's progress, i've smiled coyly and whispered, "it's marinating."

as though a 10-page paper on jackie onassis were a slow-roasting rack of lamb that mustn't be rushed lest the delicate flavors be unsettled.

but, in all honesty, it isn't nearly so sophisticated as that. it is, simply, a 10-page paper on jackie onassis that i'm presenting in 52 days and which i've not yet begun to write.
by oline

double merde! I'm sorry to tell you this, but it sounds like you are going to have to cut back on your social calendar, or call in to work for like 3 days (I would choose the latter.)

that does sound nice!