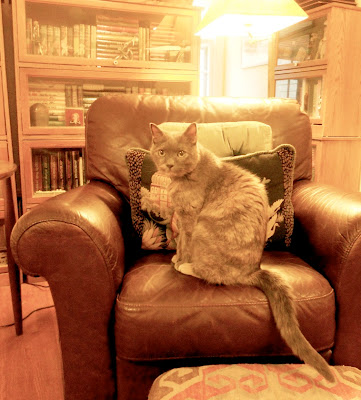 it's hard to know when to let go. of clothes or ill-fitting shoes or pets. i know this. i understand it. i am, after all, still wearing those blasted pointy-toed yellow shoes that i bought after that stupid breakup five years ago. but we're not here to discuss the yellow shoes (damn them!). we're here to talk about my parents' cat.

several weeks ago, my dad had mimi put down. on the saturday that my nose bled in bikram, to be exact.

you may remember mimi. she's the animal responsible for bringing the word "poo-pocalypse" into our family lexicon.

once upon a time, i'd fancied owning her. this was post-cookie and pre-vieve, when i was living with donovan. i was determined to relieve myself of my catless state and mimi seemed an excellent option. but then my mother swooped in and snagged her for my dad for father's day and the rest is history.
you can't make shit like that up. mimi was a gift. A GIFT. more like a curse.

and so my dad got to spend six years trying to control a defecating beast and i got the vieve, who has the bathroom habits of an angel.

not a day goes by i don't thank god for that.

so mimi is dead now.

the mourning process has been... how shall we say... interesting.

18 years after his death (OMG, we are OLD), everyone in my family still gets misty-eyed over the bare mention of the dog of my childhood's name. i can't even bring myself to write it here as i know it would make me tear up. in contrast, mimi's legacy has deteriorated with alarming haste. not three weeks after her death, her reputation- if someone famous solely for their exploding diarrhea can even be said to have one- is in tatters.

during our saturday morning skype, on the very morning of her impending demise, my father reflected that he may have let her live too long, that her bowel warfare was probably a sign he should've heeded. something that was so easily seen in retrospect, when looking back on the vast expanse of all those shitty years.

this thought was carried further in a letter i received before leaving for prague, wherein my father suggested that my mother held him accountable for the cat's sad, sad plight. she should've been put down sooner. he was mistaken not to have done it long ago. in a subsequent letter, received upon my return, he alluded to the burden of having to care for her for the last six years, the frustration of administering a parade of pricey medicines that had absolutely no effect.

given that the grief process seemed to be moving at lightening speed, i suppose i half expected it to be over by the time i returned from europe. alas, no. i arrived back just in time for it's coup de grâce.

in a phone conversation on monday morning, my father gave mimi what very well may be her epitaph: "i don't know why i kept her alive so long. really, she was an awful cat."
by oline

Email ThisBlogThis!Share to TwitterShare to FacebookShare to Pinterest
filed under: the cat who shat, the family forward, the yellow shoes

Poor Mimi, shitastic as she was. But come on: the materials from this is priceless. THAT's the gift.

she is the gift that keeps on giving