1 a few words on word choice

word choice is one of those things to which writers dedicate an absurdly massive amount of time in proportion to how much attention readers pay it.

because (and i exempt everyone who has ever been in maph from what i'm about to say) word choice isn't something most readers notice- unless it goes wrong. up to that point, they're indifferent, but reach that point and they'll sally forth guns blazing to be sure you, as a writer, are aware you've committed crimes against language.

so, hey, today this happened: 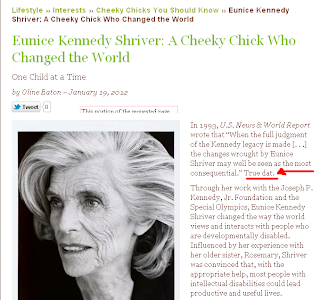 a crime against language! the result of an editorial change i would've accepted without question in any context other than that of people with intellectual disabilities and the special olympics.

sensei declared it "the literary equivalent of finding a severed toe in your soup."

i promptly pitched a well-mannered southern fit along the lines of um... please god, dear editor, no, and we returned to the original line of "true that" and walked away with a new NLB inside joke. end drama.

still. it's frightening, the power of one word. or even just two letters.

Email ThisBlogThis!Share to TwitterShare to FacebookShare to Pinterest
filed under: all my little words, deep deep thoughts from the naked lady bar, oline elsewhere on the interwebs

Oh thank goodness they changed it back...