2 soundbites from the naked lady bar: dancing in the streets, fuzzy muppet dicks, and the unfortunate life of dana dunham 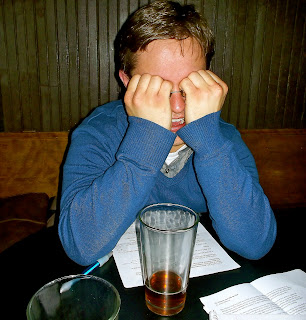 "i'm eating grits from a thermos in a bar. that's who i am now."
"the unfortunate life of dana dunham... i could write that."
"well, sometimes we do water metaphors."
"which, how did lionel ritchie come up with a better song about dancing in weird places than mick jagger and fucking david bowie? by which i mean literally mick jagger fucking david bowie."
"the animals' big book of dicks."
"fuzzy muppet dicks... that is what is missing from our oeuvre. that is what we will cellophane wrap and sell to the masses."
"the beastialiacs."
"that was fun, that idea you had there to murder me."
"no, it was a stage trick of the stage."
"let's be sure we're all on the same page of our imaginary book about dicks."
"i think he can be our main aria."
"the alaskan bear with the tiny penis?"
"well is it tiny? i mean, it's all relative for bears."
"i think the question has to be asked: did andre the giant have a giant dick?"
"i know you're from a deeper southern place than me..."
"have i not told you guys about our drivers?"
"mice are pretty small and even little girls are pretty big."
"this german russian family with shitty toys..."
"it's like a bat symbol."
"then wilt chamberlain comes and pleasures your wife."
"that was unintentional miltonic poetry."
"i hope the tamale guy comes."
"the somali guy?"
"i swear to god, you must pee by the door because it's totally not normal."
"your name is faith and if you don't deliver this to me in an essay then no one can."
by oline

Aside from the animal dicks/giant vaginas conversation, I feel like we were rather restrained last night. I don't know if that's a good thing or a bad thing.

yeah, we were bizarrely sedate. peters asked how writing group went last night. i didn't have the heart to tell him that we added to our oeuvre of dick books.