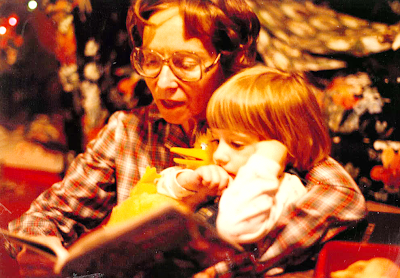 in december of 2004, burvil fell and broke her hip. four days later, we spent a night together in the north mississippi medical center tupelo hospital during which both of us believed she was going to die.
this was my first brush with true disaster. having watched at least three documentaries on titanic, i felt fully prepared. on my way to the hospital, i raided the christmas aisle of the grocery store for festive things, as i did not yet know there is nothing more depressing than the sight of sad people in santa hats.

burvil fell on a tuesday. december 13th. she was standing on a stool pulling christmas decorations from a cabinet when she fell.

my grandfather wondered how long she lay there.

he and i sat at an empty orange table in the hospital cafeteria- the jello cup i bought with my own money stood abandoned between us- thinking of how this woman we've known for forever, this 75-year-old woman who had never before been broken, pulled herself across the unmopped kitchen floor and called him on the phone.

when we returned to her room, i encouraged everyone to leave. i swore i'd everything under control. when they departed, i stood at the door of room 204, waving, as though i had been accorded a tremendous honor i was grateful to be accepting on tv.

i will know there are things my parents must never know.

i've failed to mention that this was the year my father discovered he could stuff christmas lights in wine bottles and make pretty.

the lights in the bottles were a fairly simple thing, but evidently no one had seen anything like it at the time. upon entering burvil's room, every nurse asked, HOW did you do THAT? like it was a christmas miracle rather than a simple matter of coaxing a string of standard fairy lights down a bottleneck.

the bottle of lights sat on a plastic chair by the bathroom. an object of such glory that, in a room with very limited furniture, it warranted the last available place to sit down.

i don't know when i started saving bottles. somewhere in the mess of disasters and people i love being hospitalized in late 2009, i suddenly found i could not throw them away. i needed them.

the bottle of lights is what i remember about that night in the hospital when my grandmother and i both believed she was going to die.

during the four hours she was gone- in the middle of the night when they'd finally taken her away for the test for which we waited all afternoon- i sat in her hospital room. alone. in the dark. with the light.
by oline

Email ThisBlogThis!Share to TwitterShare to FacebookShare to Pinterest
filed under: burvil, faith in the city