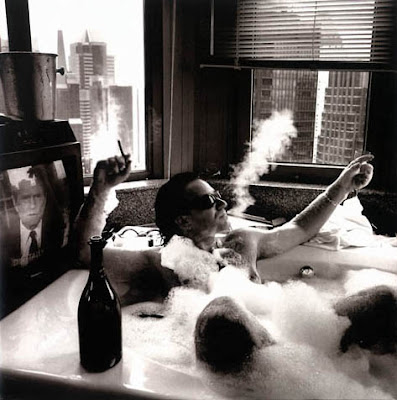 when we meet him in the opener of achtung baby, our protagonist is dazed and exhilarated, stumbling about the berlin subway system. he's done with the past and frantic for something new. he fucks it up and it takes him 34 songs to recover.

you could love "mysterious ways" without ever having that context but, to me, u2 is an important band because of that context.

the album is about taking a risk and getting burned and wounding everyone around you. it's no accident that the protagonist reassures himself throughout, repeating "it's alright. it's alright."

what resonates with me here- what you miss if you don't consider the albums collectively- is that in "zoo station" when the protagonist lays out the fact that he's going to jump, when he says he's ready for what's next, when he repeats that he's ready for the push... he freezes.

he does not take the leap.

we want to believe he did, but listen to "mysterious ways." listen to this line: "while you can stand there, you could move on this moment, follow this feeling."

he lied when he said he was ready. eight songs later, he's still standing there.

and so, achtung baby isn't about making the jump (and the "jump" can be a metaphor for anything you want it to be). it and the two albums after are about the scary shit that happens when you don't. when you hold back. when you run away. when you try to throw your arms around the world.

with the ticking bomb in "love is blindness," the protagonist is paralyzed, numbed- by images, the past, the future- and he remains so through the entirety of zooropa. there's a reason the album sounds so hypnotic.

for nine tracks, he's frozen ("faraway, so close!"), and yet, still, he cannot let go. he doesn't even have the heart to sing the last song. instead he exits, handing it over to johnny cash, and awakes in the discotheque of pop.

pop is a raw spiritual undoing splashed in enough glitter that it can almost masquerade as a party. it almost sounds fun. but then you realize it's a glitzy tangle of chatter and tight spots and fast escapes and sudden shifts.

the pop in the title isn't just pop music. it's the pop that comes after the exhilaration of achtung baby and the numbness of zooropa. it is the bubble's burst.

the protagonist is at a strip club in the middle of the day, when it suddenly hits home how far he's wandered. in "mofo" he pleads with his dead mother to show him how to get out of the mess he's in and that's pretty much the album's high point. you wind up in the last track with him on his knees, speaking directly to jesus, pleading, "wake up, dead man"- with someone talking in the background all the while, as if to emphasize his insignificance.

this sounds terribly depressing. i swear it's not. because of all u2's albums, i think pop is the most honest, the most authentic. it captures them in a weird moment- on a month-long bender in southern france, struggling with the pressures of their art, their addictions, their women and their past. it's not at all pretty ("miami" is a damn ugly song), but it's there. it's their bullshit. it's real.

and while i would like to dismiss all the albums that came after pop, i can't because they're important to the point i'm trying to make through this elaborate metaphor of u2 lyrics- which, i suppose, is this:

the leap is never so scary as we imagine.

and the story of how we get there is the most important part.

because it's only with the final plea of "wake up, dead man" on pop that the protagonist takes the jump for which he's been summoning the courage since achtung baby track 1 (i swear, in the final 40 seconds, you can hear him gliding through the air). and it's only in "beautiful day" that he realizes it wasn't so scary. that after the flood, all the colors came out.


{modified from THIS and THIS.}
by oline

Email ThisBlogThis!Share to TwitterShare to FacebookShare to Pinterest
filed under: the natural condition, u2 please