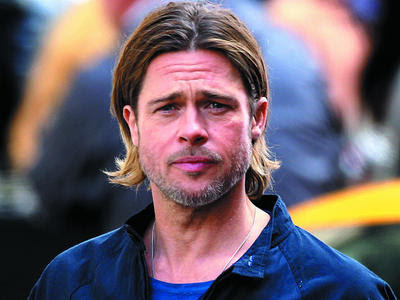 HAVE YOU LOST YOUR EVER-LOVING MIND?

you have been a celebrity for like 30 years. for the last 7, you've been a member of the world's favorite tabloid triangle, the biggest thing to have happened since eddie fisher jilted debbie reynolds and ran off with liz. it has been SEVEN YEARS since you divorced and yet the tabloids still cover it as though it were yesterday. you are the eddie fisher of today. you should know better by now.

but this country's celebrity industrial complex is infinitely tricky, so i'm going to give you the benefit of the doubt. i'm going to assume you maybe didn't think anyone read parade magazine anymore (a valid assumption- i didn't know they did either) so that's why you told them you were "pathetic" during your marriage to jennifer aniston.

but here's what i don't understand. in the last four days, during which this has turned into a shit storm resulting in an aniston-fan fatwa, why the hell have you been trying to correct the record?

i'm doubting you're surrounded by academics who can tell you about the ripple effects of these things but this seems like pretty rudimentary stuff. it should be in your knowledge basket by now.

you should know that there is no correcting the record. that once you've said something it has been said and, despite your best efforts, anything you say subsequently will only serve to make everything go to total shit.

dear brad pitt, you are being an idiot. i realize you're promoting a film and doing a press tour and you really really want an oscar for this one* but, for the love of us weekly, shut your mouth.

Email ThisBlogThis!Share to TwitterShare to FacebookShare to Pinterest
filed under: letters to very important people

sing it sister! what an asshole. I miss "thelma and louise" brad. the hot one who didn't talk much.