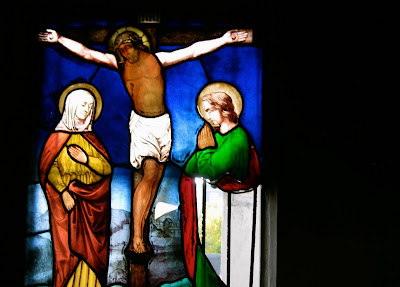 it's hard to walk out empty-handed. we almost always take some bullshit for the road.
and so my brief stint as a southern baptist fundamentalist left me a ferocious perfectionist with a proclivity for good old catholic guilt. that is why i went to church the first sunday after my parents dropped me off at college. i knew myself well enough to know the self-reproach would've been unbearable had i not gone.
i wore my prettiest dress. i curled my hair. and i strategically sat in the left aisle middle by the window, so if any good christian boys looking for a good christian girl had been watching they would have seen how the sun streaming in through the amber stained glass comprising the hem of jesus’ robe brought out the red highlights in my hair.
dismay is perhaps the best description of the emotion i felt when the announcement that we should all take note of the vast population of “young people” seated in the balcony made it apparent that i had, in fact, taken a seat in the very heart of the senior citizens row.


but that's not why i stopped going to church. i stopped going because, six weeks later, i sat in that same building, in a room full of white people, while a preacher told me to vote for the republican gubernatorial candidate and to recognize that "the evil falsehood of evolution" stemmed from the work of "woman scientists" and islamic fundamentalists.
i was a woman majoring in biology who had a test on darwin the next day. i had only a rudimentary knowledge of islam but was, nonetheless, pretty certain islamic fundamentalism had nothing to do with gender parity in the sciences.
that morning i learned that i cannot find god in white rooms.
i stopped going to church.
but, whether we like it or not, we take our bullshit with us. and so every sunday morning for the rest of that school year, i woke up early and got dressed. i got in my car and drove around town from eleven to noon. never mind that i had a roommate to whom such devotion was irrelevant and no friends to note my piety. i dressed as if for church, set my bible on the passenger seat and drove, because there was a hole in my sunday morning that i knew no other way to fill.
by oline

i do love it when you come to my potluck :)

'that morning i learned that i cannot find god in white rooms' - you will be quoted. this piece is sublime. it must be published again and again.

and I agree with "Blah"