3 Movies You Really Should've Seen By Now If You Want To Consider Yourself A Grown Person: Spaceballs 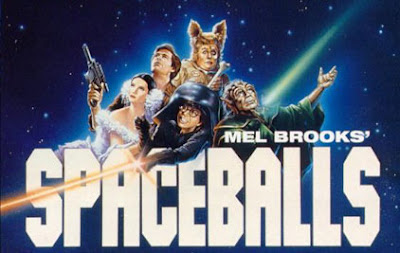 watching spaceballs for the first time is ideally done after you've seen the original star wars films at least 400 times and you've just had your wisdom teeth out, contracted the flu, are high on both valium and nyquil and bleeding profusely from the mouth.

mind you, the circumstances outlined above are the ideal. they're not mandated.

based on my many viewings of spaceballs wherein these were not the circumstances, i can attest to the fact that the film holds up even if you're not high as a kite.

i resisted spaceballs for forever. because i was young and immature and knew nothing. much less that there was such a thing as "parody." this is why you really should've seen spaceballs by now if you want to consider yourself a grown person. otherwise you're being young and immature and you know nothing. parody is important. once i managed to wrap my head around that novel concept, it was a whole new world! a dazzling place i never knew!

spaceballs offers many many things. bill pullman at his lankiest. insightful commentary on racial conflict and commercialism. quotes a'zillion ("may the schwartz be with you", "she's gone from suck to blow!"). Fashions. plus, my father's favorite philosophical doctrine: Living In The Now.

My favorite: "I knew it! I'm surrounded by assholes!"

a classic. So many of my middle school / early high school weekend sleepovers featured Spaceballs and Major League that I am pretty sure I could compose a working script for each from memory with a magin of error less than 2%.

kinda want to test that theory...