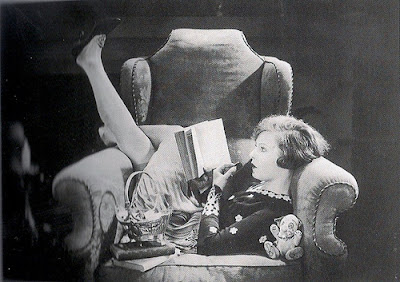 the only book my parents ever banned was scarlett: the sequel to margaret mitchell's gone with the wind by alexandra ripley.

it had been excerpted in an issue of LIFE magazine that my mum had read while we were staying at my grandmother's house and, in that excerpt, scarlett and rhett had sex.

i don't know who in our family lodged a formal complaint about this. scarlett was, after all, not by jane austen. and we were talking scarlett o'hara and rhett butler here. over the course of an 823-page novel, those two were bound to be hooking up.

but the notion of these fictional characters having sexual relations was apparently far more scandalous when excerpted in the country's most beloved monthly magazine. and so, in my grandmother's house, the scarlett issue of LIFE was declared "trash" and hastily tossed into the pile of Sears catalogs and phone books that went to the hall coat closet to die.

at the time, i was a well-read age ten, so i'd dabbled in some pretty scandalous stuff. biographies of princess diana had given me an extremely accurate picture of adulthood (wrist slashing! bulimia! love affairs galore!) and sweet valley high was pretty much all death, all the time. so it's ironic that my parents protected my innocence by prohibiting a bodice-ripper with precisely two sex scenes and a birth so horrific that the brief joys of the sex preceding it were rendered null.

never mind that i had been allowed to repeatedly read gone with the wind itself, a novel prominently featuring marital rape and the KKK. something about scarlett as excerpted in LIFE magazine was too much and, accordingly, the book was banned.

in light of this, i did what any kid would do. i crawled out of bed in the dead of night and rescued that LIFE from the waste basket under the kitchen sink. i wiped the dinner remnants from the face of vivien leigh and reread the scarlett excerpt so many times that pieces of it are, to this day, emblazoned on my heart.

and then i waited...

when, in 1994, CBS airred a tv-movie starring everyone in hollywood willing to attempt a southern accent, i taped it and, as though i were a scarlett o'hara catechist and it was a pillar of my faith, i screened the scarlett mini-series after school. every day. for a year. just another reason why we are surprised i had any friends.

in 1995, i decided it was time. i had to disobey my parents. my moment had come.

a prime opportunity for flagrant disobedience arose during an unchaperoned trip to books-a-million at the cool springs galleria. leaving my friend sitting indian-style before the safe pastels of the baby-sitters club, i darted into the fiction aisle, grabbed one of the dozens of remaining copies of scarlett, a book everyone else in the country had by now read, and handed the cashier my $5.95. i heaved a sigh of relief when she handed it back to me encased in a brown paper bag. i was grateful for her discretion.

what did you buy at the mall? my mother asked innocently when i returned home.

sweat broke out on my upper lip. i said nothing. i couldn't bear to upset her and confess, and so i hugged the brown bag tightly to my chest as though it's were something by which i was deeply embarrassed (training bras? maxipads?) and- with all the adolescent angst i could muster- raced up the stairs.

my mother asked no questions. she may've thought i'd gone mad.

and so i read scarlett. at last.

thanks to my father's exacto-knife and elmer's glue- scarlett masqueraded as james herriott's all creatures great and small. i read it while standing at the bus stop, while riding the bus, during class breaks, during recess, during lunch, all the way home and when i should've been studying for a geometry test. at night, i lay awake reading it by flashlight, sweating beneath layers of unnecessary blankets so no one would see the bulb's glow.

i flunked the geometry test and read all 823 pages of scarlett in six days.

my parents had banned scarlett due to the sexual content but, ultimately, it was a book in which the absolute most scandalous plot twist was that of an unwed woman moving to ireland on her own.

in other words, i had waited four years to read a book with a message of female independence that was insanely boring for a fourteen-year-old.
by oline

Email ThisBlogThis!Share to TwitterShare to FacebookShare to Pinterest
filed under: going with the wind, lady di, o young oline, reading in the city, the family forward

I LOVE this. my favorite part is the fake book cover.