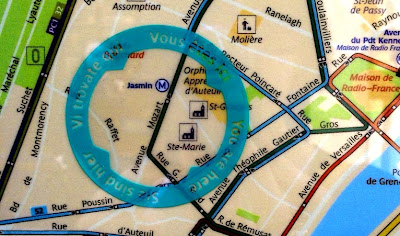 going to paris was part of the story. if not jackie's then mine. i knew that as far back as march, when the light in new york was not enough and i decided- practicality be damned- i was going to paris.

i need a purpose. a reason. i find it hard to simply be.

so for those first ten hours in paris i was on the hunt. systematically, i hit all the high points of that city i love, all the while eyes peeled for whatever it was that had brought me there and whatever it was i would be bringing back with me.

and i got nothing.

the fries were gone. jackie's houses were uninspiring and my travels uneventful. at one point, desperate, i picked up a rock from a walkway by the eiffel tower because at least then, if i returned without a tale, without words, i'd at least have something tangible from this trip that i could hold in my hand.

with two hours left- annoyed, tired and with terribly sore feet- i collapsed on a bench in the back garden of notre dame.  half an hour later, my story sat down on the opposite bench.

this is a useful metaphor. or at least i choose to see it as such because it is evidence that i am not crazy. paris was part of the story. and the story is always there, whether it looks as we imagined or not.
by oline

OF COURSE I KNEW THAT BECAUSE I ALREADY READ AND EDITED THE STORY! YES!

whatever. dude, everybody in the naked lady bar knows we don't do our editing until 4 pm day of!

i want to read the story! (but not edit it because that is not within my scope of practice :)