0 i swear OitC is not becoming a news service...

that said, you should totally read THIS.
rick perlstein!
betty ford!
obituaries!
sigh. 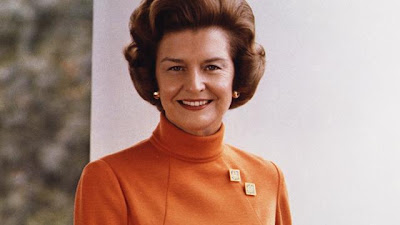 the excerpt for those who won't...
"America had been a nation of shame-faced secrecy in so many of its intimate domestic affairs. The 1970s was when that began to change. Betty Ford was that transformation’s Joan of Arc.

It made her a threat to some. The Christian right was especially cruel. In 1976, when a rabbi collapsed of a heart attack beside her at a ceremonial dinner, she courageously took the lectern to lead a prayer for his life. The rabbi 'was pronounced dead at a nearby hospital a short time later,' Christianity Today mocked in its next issue.

But that was the same year Christianity Today was advertising a book entitled 'The Act of Marriage: The Beauty of Sexual Love,' by Tim and Beverly LaHaye, which argued that Christian wives should want sex as often as possible, and even demand more orgasms.
Betty Ford always seemed to be vindicated in the controversial things she kept doing."
by oline

Email ThisBlogThis!Share to TwitterShare to FacebookShare to Pinterest
filed under: loss in the city, retro