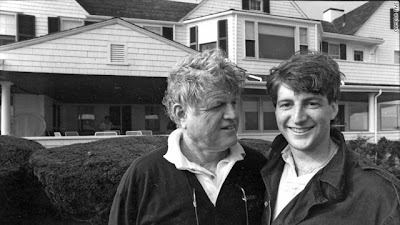 in 1996, LIFE magazine published a full family tree of living kennedys and, after much research, i concluded patrick kennedy was the one i would marry.

this was way, way back. when all the other 3rd generation kids were in their early 40s. patrick was barely 30.

in contrast to them, he seemed impossibly glamorous. he'd had a drug problem in college. he'd first run for office at the age of 21. add to this that he boasted the only head of red hair in the family and he was precisely the type of man 15-year-old oline would've wanted given that a relationship with jfk, jr. seemed too ambitious and matthew modine was already married.

a lot has happened for me and patrick in the last 15 years. i've gotten my braces off and dated actual boys. he became a congressman and mowed down a traffic cone. i've evolved into The HOT RedHead. he is middle-aged. and while, in my heart of hearts, i knew we would never marry, i was surprised to read that he was engaged.

and this past weekend, when jackie's stepbrother told me caroline couldn't make it to his party next month because she was going to patrick's wedding, i was surprised by how sad it made me. the realization that i will never marry a kennedy. which means there must've been a part of me that really thought i would.
by oline