0 writing is a dark hallway down which we blindly strut. 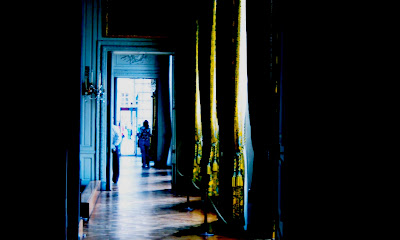 i've been writing this thing. it started as a rebuttal to the primary theological tenet of the church of my childhood and i wrote it for the oh so honorable reason that i wanted to spit in that church's eye.

four sentences are all that's left of the bleeding carcass i first threw on the table at the naked lady bar back in january. the carcass that, through herculean effort, the dane and sensei cleaned and dressed and reassembled, so's it's tricked out like a semi-precious gem.

there's a story now. plain. and simple. and possibly unpublishable.

i started with the last three lines, which meant i spent five months getting back to the beginning. ultimately, all it took was people on a balcony and a woman with burgundy lipstick staining her teeth. and i thought, YES. i've done it! because i'd managed to bring up burgundy lipstick twice in ten pages, i thought i'd finally earned my end.

in the naked lady bar, i asked sensei if the balcony and the burgundy lipstick were working. he said, yeah, yeah, but this thing you've done right here, right after it. THAT? THAT gave me chills.

we writers write for two very particular instances, both of which carry an emotional power that is the literary addictive equivalent of crack. that fleeting moment where we can read something we've written as something written by someone else. and, even more so, the moments where, in writing, we do things of which we are not actually capable; things that, though we have done them, we do not even see.

the thing that gave sensei chills? what i'd done right there? i didn't even know.

i've written a story. she's put together and polished. she shines like a diamond, but she's a bullet in the end.
by oline

Email ThisBlogThis!Share to TwitterShare to FacebookShare to Pinterest
filed under: deep deep thoughts from the naked lady bar, sensei, writing in the city