so every now and again, as a writer, you wind up with a half-assed draft that you're not ready to publish but maybe later one day will, when you're removed enough from the sting of its half-assedness that you no longer care. or when you hit a dry spell and simply need words, half-assed or not. my system for dealing with that is to slap those posts with a date so far in the way off future as to not even seem really real. then i let them sit there and forget they exist. which brings us to this little gem written on 17 april 2007 and saved to be published at a point so far off in the future that it was barely even imaginable at the time... ie. today. 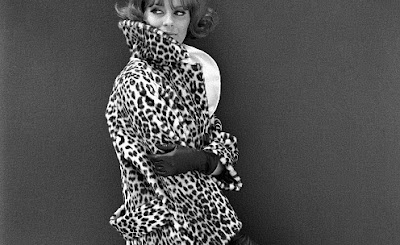 the women in my family live forever, so it always comes as a shock when they die.

my great-grandmother passed away in january 2005. the funeral was on a day that was unbearably cold for mississippi.

this was also the day that i burst from the bathroom naked but for a leopard print coat and saw twelve varieties of horror flash across my mum's face as she confronted the possibility that her daughter was one who would wear leopard print to bury our dead. it was the only moment in which i've felt like liz taylor. and it was a feeling i've been living to recapture ever since.

you know those celebrities who die and everyone goes, huh, he was still alive?? great-grandmother was kind of like that. because she hadn't really been alive for quite awhile, so her funeral felt less like a funeral and more like a family reunion with  a vigorously enforced dress code of all-black .

it must be difficult to speak at funerals. it must be twelve times more difficult to speak at the funeral of someone you never knew. the orator's statement that he and "mummsy hand-kings" had enjoyed a series of "intimate, enlightening discourses on the hope of the afterlife" was in stark contrast to the fact that mrs. hankins- whose first name was eunice and who absolutely no one would've called mummsy- had forgone speech around 1984.

my mum strives for dignity. there's to be no singing at the dinner table. no skipping in the grocery store. none of our standard familial zaniness is permitted in any public venue in which we might be condemned for it. so it was with very great horror that, during the recitation of the most heinously horrid goshawful saptastic poem ever written, she found herself weeping. audibly. as all our mississippi relatives judged.

i knew in that moment. it was the only thing of which i'd ever been truly certain. i should've worn the leopard print. it's what mummsy hand-kings, who ever the hell she was, would've wanted.
by oline

ps. i hope mummsy handkings was great grandmother's stage name when she was doing burlesque on the natchez trace.

This is HALF? Good gravy, oline. can't wait to see the full ass!

i think i held off because of this sentence: "you know those celebrities who die and everyone goes, huh, he was still alive?? great-grandmother was kind of like that."

and it's one i still feel quite bad about.

and you and my ass, lindear. but i shouldn't be surprised. everyone loves a mime.