8 i am going to paris 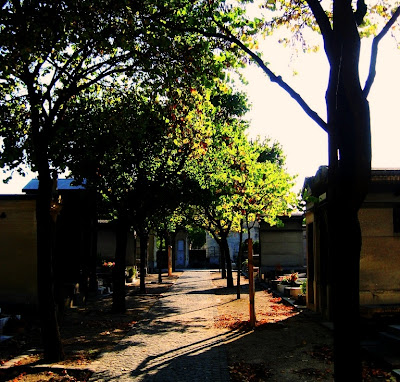 forget paris? go HERE.
there are things you know you need to do.

by which i don't mean the honorable, upstanding things, but the thoroughly stupid, senseless, impractical ones. the things people will warn you away from doing precisely because they seem to make no sense.

but those people, they do not see the story of which these stupid, senseless, impractical things may later one day be a part.

i am blessed/cursed. i see the story.

it hadn't occurred to me that i needed to go paris until i was alone in new york.

this was in march, early in my first doomed attempt to locate the top shop at the corner of broome and broadway that, despite two subsequent trips and copious billboards attesting to its existence, i have still never found- when i walked out of washington square park at the intersection of 4th and mcdougal, and the light hit the pavement in such a way that can only be described as a very poor imitation of cimetière du montparnasse on 27 september 2009.

seeing that, there was no way i could not go to paris. i knew it. i need to go.

but that sounds beyond ridiculous when you try to explain it: i'm becoming a biographer for real so that i can write this book that i'm really not writing because there's no there there, but i know in my soul that i'm meant to go to paris because the light in new york just wasn't pretty enough.

the sex toboggans are going to london. by the skin of my teeth and all my $5 bills, i'm going to be there with them. paris is a 2 day, 2 hour walk from london. (or, perhaps more plausibly, $100 by train.)

there are things you know you need to do. thoroughly stupid, senseless, impractical things.

i need to go to paris. i am going to paris.

because the light in new york, it was not pretty enough.
by oline

Email ThisBlogThis!Share to TwitterShare to FacebookShare to Pinterest
filed under: oh paris

I feel the same way about St. John's.

i feel incredibly dense having to ask what st. john's is but i assume you don't mean america's leading catholic university.

tell us what you will do in paris!!

i will eat bread.
it's what jackie would've wanted.

No worries- I talk about St. John's a lot, this would be the only reason why you MIGHT have known about it.

St. John's is the capital of Newfoundland and Labrador. I don't know a single person who has been there and not fallen head over heels for the place. It sounds like the best city in the world.

OH. you have mentioned that. i should be in paris. it's becoming increasingly clear that my brain is not meant to be in america today.

The light on the Ille St. Louis, by the banks of the Seine was beautiful yesterday. My brain was there. I was there. Now I am in Dublin. My brain somewhere between the two. I think you've had a magnificent idea.