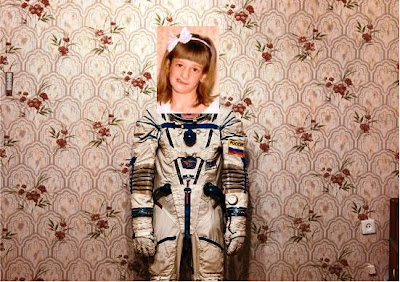 i'm totally a child of the american 1980s and, in the american 1980s- or at least in my little corner of it- there was this age of innocence before the challenger explosion where people really thought we would one day be living in space. to that end, there was a sense that we should be getting ready.

my family, enthusiastic as ever, did its part. we got ready by being freaking obsessed with freeze-dried food. because, i guess, for southern people food is always the primary concern. but, seriously. i look back now and i'm all like, why?! surely we didn't really believe we eatons would be eating on the moon. sadly, i think we maybe did.

we were particularly preoccupied with the ice cream, which is both unsurprising (given my predeliction for dairy) and shocking (given the abject nastiness of what apparently passes for dairy in space).

the freeze-dried ice cream we "enjoyed" was meant to approximate neopolatin. it was a chunk of a chalk-like consistency with three sections, dyed alternately pink ("strawberry"), brown ("chocolate") and white ("vanilla"). and yes, the scare quotes are necessary. these flavors, they were aspirational, not actual.

the ice cream also had the extra-exciting feature of coming in a package clearly manufactured by the makers of capri sun, so you had to bust into it with a great gnashing of teeth, which would've been an intolerable inconvenience were we ever actually eating it in space. but we did not think of that then, so consumed were we with pride over our preparedness for the inevitable eventual time when we would one day live in orbit.

the notion that we would one day live in space was always presented with a degree of urgency. it not only would happen, but really, really soon.

fyi- i'm thirty(ish). i may be ready but i still do not live in outer space.
by oline

Oh god yes, we were the same way. I remember that awful freeze-dried ice cream, and the Tang, back when hearing the word "Tang" made you think of outerspace adventure, not giggle lightly.