oh the places you'll go
here's where we are:

i am a red-headed, sexy dancing, cheeky chick who, instead of writing her jackie in paris book, is freelance editing a biography and on the verge of a sex tobaggan speaking tour.

yes, yes, this is impossibly glamorous. you are all bowing before my gold glittered stillettos in the face of the combined seven double-spaced pages that comprise the entirety of the recent string of success of faith/fath caroline/caroline/oline eaton.

look away lest you be blinded by my dazzlement.

(as you can see, i take this all very, very seriously.)

i've been recording a process here. the process of writing a book about jackie in paris and the million unexpected directions that may lead. i've been banking on the notion that the story of getting to the there that doesn't exist will be just as interesting as it would have been had i found the actual story. i still don't know whether that holds true.

but i do know the red hair is important.

there was not a single fan of the black hair in my family. in my mother's immortal words: you don't look like you anymore. after my having not looked like me for five years, you can imagine her relief upon the discovery that k.lo needed a model and wanted me.

for two solid months, every friday my mother asked: is this the weekend you get the red hair?

through all of winter, my family looked upon k.lo as a messianic figure- a savior come to wipe away the horror that was herbal essences midnight noir so that i would once again look like me as opposed to the scary gothbeast i'd apparently been for much of the late 00s.

second only to my mother's excitement was that of my grandmother, who trilled an oooooooooooooh worthy of a twihard and remarked matter-of-factly: people remember redheads.

there were many reasons for the red hair. i was sick of black. k.lo is a styling goddess. it was free.

but also, i've concluded that in a field dominated by baby boomer men, the only surefire way to make an impact is to be a biographical lady gaga. red hair pretty much makes that real.

the problem with red hair is that it's outrageously demanding. you can't wash it every day because it fades. when you do wash it, it needs cold water and special shampoos. in the face of all this, i had the brave new idea that it might be wiser to give up on washing and funnel my energies into styling instead.

that is why i, biographical glamor goddessoline, spent a saturday night alone in my apartment rolling the red hair up in rag curlers. and it is how i wound up ireedemably clowny come saturday a.m. 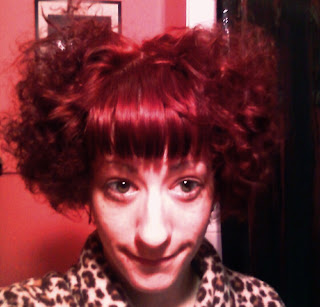 Email ThisBlogThis!Share to TwitterShare to FacebookShare to Pinterest
filed under: biogrophiled, lindear, the family forward

I freaking love you.