it's 1995. rose kennedy has just died. and, because even at the age of 14, young oline was pretty sure the whole world would one day be dying to know her views on important issues, she wrote a series of essays detailing them. these entries comprise the entirety of the section entitled "DREAMS". 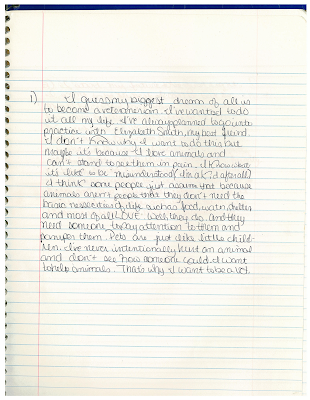 [trans.: I guess my biggest dream of all is to become a veteranerian. I've wanted to do it all my life. I've always planned to go into practice with Elizabeth Smith, my best friend. I don't know why I want to do this, but maybe it's because I love animals and can't stand to see them in pain. I know what it's like to be misunderstood (i'm a kid after all.) I think some people just assume that because animals aren't people that they don't need the basic nessecities of life such as food, water, shelter and most of all LOVE. Well, they do. And they need someone to pay attention to them and pamper them. Pets are just like little children. I've never intentionally hurt an animal and don't see how someone could. I want to help animals. That's why I want to be a vet.] 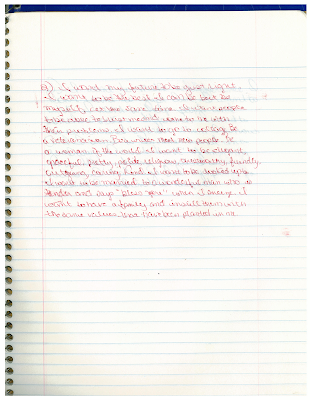 [trans.: I want my future to be just right. I want to be the best I can be but be myself at the same time. I want people to be able to trust me and come to me with their problems. I want to go to collage. Be a veterinarian. Be a writer. Meet new people. Be a woman of the world. I want to be elegant, graceful, pretty, polite, religuous, trustworthy, friendly, outgoing, caring, kind. I want to be looked up to. I want to be married to a wonderful man who is tender and says "bless you" when I sneeze. I want to have a family and instill them with the same values that have been planted in me.] 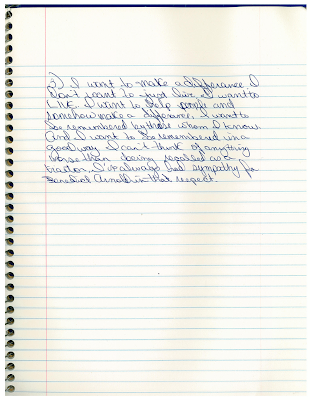 ps. i did not become a vet (neither did libby). i do not need to have a family to brainwash and i am still trying to be the best i can be while being myself at the same time.

There is an awful lot of comment worthy quotes in here but I will hastily summarize. Were you and my wife secretly communicating as 14 year-olds? Because you guys are like peas in some sort of pod.

Woman of the World!! Mission Accomplished!

My personal favorite is the sole qualification for a man to be wonderful is that he blesses a sneeze.

he was supposed to be tender too.

and please appreciate with me the moment of phonics gone wrong in the statement: "i want to go to collage."

maybe that was your subconscious desire to live in a more crafty world.

i do really like collage. perhaps this was an early indicator of that inclination.