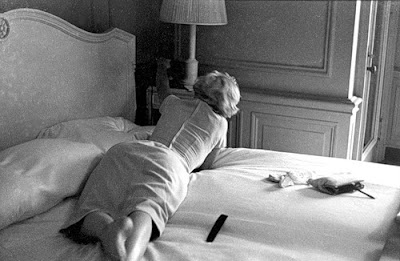 i'm not an ambitious person. i like goals, yes, because they're how i get anything done, but i'm also totally content dallying about, all dreamy and pie in the sky.

so it's odd that for the first time in a long time- probably since i sat friendless in memphis and, with eerily laser like focus, cranked out jackiebook- there's an end point towards which i'm working. whether it comes true is irrelevant. what matters is that it's there. it's an adventure. and i always like that.

but here's the thing: as i push further into the myriad random avenues that are apparently a part of becoming a biographer, everything seems to be folding into everything else so that my whole life is now one long, unending conversation on the topical triumvirate of jackie o, apostasy and biographical appendices.

i am der ring des nibelungen! not in content or brilliance, obviously, but in interminability, yes.

after new york, i realized i have this crazy conversation and a whole world of work but i don't have much that's pure, selfish fun and not in some way wrapped up with these other things. which is a problem because, after 9 pages of biographical editing that was the mental equivalent of a three-day hand cramp and four months spent mired in the philosophical writings of catholic heretics, purely selfish fun would be pretty much divine right about now.

this is an entirely unacceptable state of affairs. accordingly, i went about rectifying it as quickly as could be through the most logical, mature available means: a slumber party. because that's such an obvious cure.
by oline

brilliant! and reason 9,456 that I wish I lived closer!