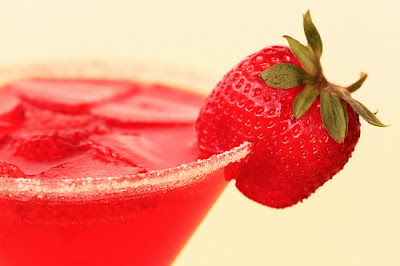 here's what you do: walk into a bar and ask the bartender to invent something non-alcoholic and totally delish.

admittedly, this doesn't elicit the gratifying jaw-drop and fist-pump granted to yellow chartreuse and it meets with varying degrees of success. at one bar, an unfortunately worded inquiry into whether there was "anything virginal" on the menu yielded a haltingly confused response of um... maybe the white russian...

however, this habit yields a mighty high number of free drinks. some of them, astoundingly good. and, if you're at a place renown for their cocktails, odds are they make a mean mocktail too.

last night, kantor and i hit up maude's for one of those meals where you complain about how full you are and you can't even finish the entrées but then you still order dessert.

in the midst of that, we had three rounds of mocktails. (see, it's totally a thing.)

kantor's had a running theme of cucumber, but mine were whatever struck owen the bartender's fancy. a ginger smash. the virgin pimm's cup. and some desperately yummy orange thing whose main ingredient appeared to be raw sugar granules.

it was the beverage equivalent of the creamsicle pops my mum would only buy once a year, on the hottest day of each memphis summer when i was a kid.

it snowed in chicago last night. one of those snows where the flakes are like dippin' dots. but the warmth of that drink stuck with me. that memory of being a little girl in a pink bathing suit standing barefoot on the lawn. the memory of biting into what appeared to be simply an orange popsicle and being suddenly struck by the wonder of what lie hidden within.
by oline

Love this post! Strange that it has a decidedly different feel than your others. Why is that, I wonder!?

I would totally do this if it increased my chances of just getting to drink frozen limeade.

i hadn't noticed that, croftie, and now i want your analysis. maybe it's the "ya'll" usage? or the repetition of various forms of "yield" in entirely too close proximity? hmm... seriously, though, when you're here in june we need to hit up maude's. oh the french fries. there are no words.

and lindear, i think it will increase your chances exponentially.