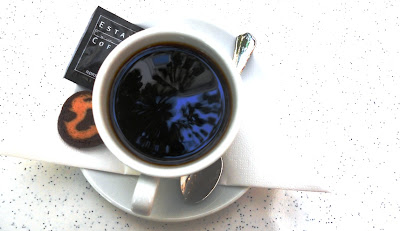 there's a very great sense that i am vastly unqualified to be writing a column so, much like jackie kennedy and the presidency of jfk, i am- to quote the single most embarrassing turn of phrase to appear in jackiebook 1.0- "cloaking personal inadequacies in the appurtenances of a power as yet unattained."

in the interest of full disclosure, because the mini-ness of my minidress did not register until i had left the house, i am also, for all intents and purposes, writing in public while wearing leggings as pants.

this is a scenario so radically far from my comfort zone as to be not quite believed.

and, as you may have ascertained, it is not going well, as i am, in fact, clearly, not writing that column but writing this instead.

writing in public has never worked for me. largely because my brain is drawn to the conversations of other people like glitter sticks to skin.

in this case, for instance, it is the earnest kid two tables behind me who is engaged in an earnest discussion with an equally earnest girl. his argument climaxes with the appropriately earnest phrase, but, no. no, really. the patriarchal overlay of the city's parking meters is just bringing me down.

i do not even know what that means, but it's sure as hell bringing me down.

i wonder how people work like this, how croftie wrote a whole book like this. in the pig, among the chatter of coffee dates and undergraduates and the med student three tables to the left who is doing irreparable damage to his teeth by dentally caressing a ballpoint pen.

i have always done better by myself, surrounded by my kingdom of pretty pictures and silly things, listening to a single song on repeat. but that is not an option now, because this is really happening. therefore, it needs to look real.

my personal inadequacies are cloaked in the appurtenances of a power i have not yet attained.

i am wearing leggings as pants.

i'm sitting in a coffee shop writing a column.

i have a lot of time to ponder all this at length later. the leggings, the inadequacies, the attempt to make the process of writing and being a writer look a particular way rather than simply letting it be. i think about all this. all night. because, apparently, as i sat in the coffee shop writing a column because that is what successful column-writers do, the coffee i drank was not decaf.
by oline

I love this post. I learned that someone in my life used the word Appurtenances and cloaking at all let alone *in the same sentence*. And then there is this:

Which at first i thought was a Twilight reference but then recalled the $12 dollar vocab words above and wondered what Twilight would have been like if it had been entitled Crepuscular.