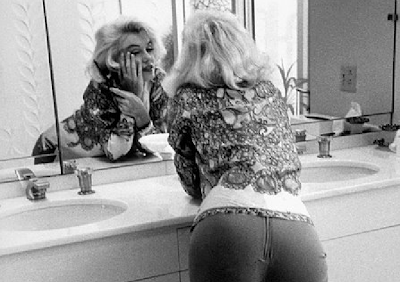 writing hurts. not always, but sometimes.

like when you gash yourself shaving and tug on tights before the blood dries and then, when at the end of the day you go to pull them off, the sensation of pulling fabric from flesh smarts so that you can't help but cry out.

i am standing on a precipice. sensei believes i am on the cusp.

those are romantical ways of saying i'm staring down the pile of important papers stored six inches from the litter box and looking for new ways to see old things.

in high school, mrs. reynolds taught us how to write papers.

next, you fill them with your facts.

then you lay all your cards on the table. every last one.

this was the fun part, the part that i loved. because this was the great coming together. the moment when you realized that in this deck of cards, you held an idea. an idea admittedly derived from whatever ideas of other people were held in the rather limited centennial high school library holdings, but an idea nonetheless. and an idea put together, laid out on that table, in a manner that uniquely belonged to you.

this process was a fundamental part of the way i learned to write and it is one i have never been able to fully escape. even now, when sentences, facts, phrases, opening lines occur, i text them to myself. i put them down on paper. i lay them on the table and i look for where the pieces fit.

jackiebook 1.0 was written this way. in part, because i am secretly exceedingly vain and hold the notion that my rough drafts and notecards and marginalia will one day warrant inspection and be poured over by scholars wearing white gloves and sitting in temperature-controlled, darkened rooms. but also because this is the only way i know how to do this.

a book is a scary thing. a notecard, now that is manageable.

sensei says i am on the cusp. he has asked me to take the ring to mordor. i am staring down a pile of important papers stored six inches from the litter box and facing forty pound boxes.

i am realizing that it is difficult to read the things you once wrote.

because there is a brief moment of separation from one's work that comes about a month out. a flash in the pan where you can read something you have written and see it as something written by something else.

i had to proof "the sexy dance" the other day and throughout, i found myself thinking, damn, this is tight. the work did not feel like mine.

i'm going to go out on a limb and say this- the moment when you can see your work as though it weren't your own- that is the moment writers write for.

sadly, it does not last. and then along comes the time ever after, when you return to the work you had left, the writing you once did, and confront the world of inferiority you find there.

so i go into my closet and, ignoring the forty pound boxes, pull down a very small one from which i pull the pile of notecards for jackiebook 1. i unloose them from the rubberbands by which they've been bound since the spring of 2006 and i do the scariest thing i can think of- i shuffle the deck.

i am sitting three feet from the pile of important papers six inches from the cat's toilet.

i am going back to the beginning.

i have laid all my cards on the table. every last one.
by oline

well little FrodOline, DougOlas supports your quest. You have my Bow.

excellent. i will likely need it.

"i'm going to go out on a limb and say this- the moment when you can see your work as though it weren't your own- that is the moment writers write for."

Nail on the head.

am i wrong in really really wanting my wife to comment in all caps?:

seems a reasonable request. at the very least, she should remind us that we have no friends.