5 raised in the country, working in the town 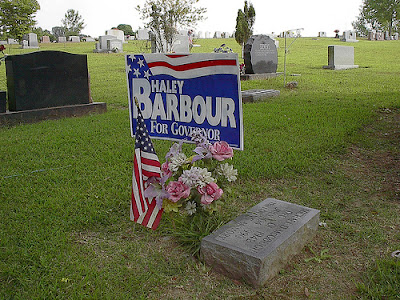 [via]
he asked where i was from. i said, mississippi.

admittedly, the circumstances here were a trifle bizarre. i was in a bar sipping monastic liqueur and staring down a british man who, because he was wearing a yazoo city fair t-shirt, i had mistakenly identified as a compatriot. or, at the very least, as someone who had been to a fair in yazoo.

this is the problem with wicker park in general and irony in particular. it hits too close to home.

so i'm apparently from mississippi now. this would please my grandmother to no end. knowing that i self-identified as a misssissippian, she would exculpate me entirely for the twin sins of drinking and being a lady in a bar.

we're talking about the woman who once threatened to ditch the ridgeway baptist church golden agers group on the side of highway 78 because they were bitching about mississippi. rule of thumb: when you're in an enclosed space with my grandmother, you don't talk shit about her state. she, like most southerners, takes this stuff seriously.

i've lived in mississippi before and my grandparents have been trying to lure me back for years, much as my parents have begged me to return to memphis. i have no intention of ever going back to either, though my grandparents seem to have outpaced my parents in the advancing of incentives, the ace in the hole being a church contact who could "nearly for most certain" guarantee me employment in the itawamba county community college english department teaching freshman comp. it is said that i could make "a good living" there.

i try to tell them. i say, but no. no. i don't need to make a good living there. instead, i have a good life here.
by oline

Am I imagining things or was there an Atlanta stint in there somewhere, too?

Am I on crack?

no, no. you're not on crack. now that i'm claiming multiple allegiances, it's getting harder to keep track. there was an atlanta stint, but my family has never really counted it since it was only for 3 years. atlanta is, however, where we bred all our animals so it's like we puppy and kittenbombed the city and fled in the night.

please also note this is photo is of a political sign in a graveyard. THAT, my friends, is my mississippi.

the dead have to cast their votes for somebody, Oline. Where you see sacrilege and opportunism I see a ripe, untouched demographic.

You hear me legions of the Dead? Get out the vote!

i'm pretty sure they dead vote quite often in the south. or at least they have in the past. not that this should deter you from going out there and harvesting that demographic.