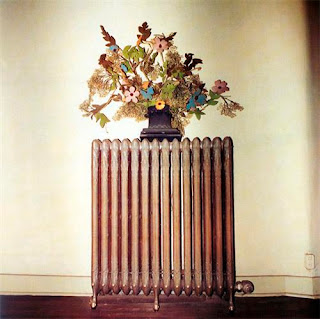 i have radiator heat, which means my apartment is gloriously tropic despite external sub-zero temps. but there are downsides to radiator heat. like the recurrence of a situation that necessitated the googling of the phrase "radiator heat bloody nose cure."

but it works. and you'd be surprised the lengths one will go to when the alternative is to wake up breathing blood.

according to my mother, i am PLAYING WITH FIRE. and, yes, those exact words were used. PLAYING WITH FIRE. because apparently this extremely scientific treatment resulting from the googling of "radiator heat bloody nose cure" can lead to pulmonary embolism and violent death.

i do not believe this. i believe it is bunk. a googling of the phrase "vaseline bloody nose radiator heat violent asphyxiating death" only points to pages like moondragon's health & wellness, which further extols the restorative nasal powers of vaseline. and surely if this were true, if i were PLAYING WITH FIRE and people were dying from sticking vaseline up their noses, surely it would be possible to google that shit.

though she said it, my mother must not put too much stock in this either as immediately after she asserts that i am PLAYING WITH FIRE and will suffocate in my sleep, she backtracks and endorses the "radiator heat bloody nose cure," saying, oh, go ahead and stick that stuff up there. you like to live on the edge and, at least this way, you'll be lubricated.
by oline

ugh. we have radiator heat now and every morning since it got cold i wake up and it feels like I've been punched in the face.

pan of water on the unit (ew) and vaseline up your nose. i cannot stress enough how much more bearable life will become.

or you could get a humidifier for $30 bucks. I had one in college and it helped a lot.

I love radiators. Maybe it's a history of living in high-ceilinged apartments where the heating vents are (surprise!) next to the gosh damned ceiling, which means I pay out the nose for the pleasure of being vaguely warm. But now we have radiators. And they are awesome. The apartment is always warm, I don't have to worry about the bill, and they're actually fairly quiet and don't dry me out. Central heat, in my opinion, is the biggest scam in history.

well, that would just be entirely too easy. and i'm totally loving your glamor shot there. you look like kate middleton!

agreed, sensei. and jmills looks like kate middleton. not you. order worked against me there.

congratulations on your becoming the next queen of England, Sensei. May the avant-garde artists who paint your royal portrait confer your likeness just well enough to be picked up by the AP as 'controversial.'

I also totally look like Kate Middleton. I'm a-gonna be the kick-assingest queen since Matilda the Mentally Unstable.

next naked lady bar night, we may need to come in our middleton finest. (and i'm glad we've seamlessly segued into a post that's coming later today...)