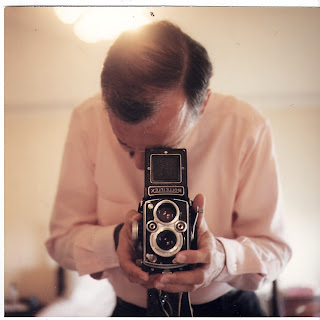 my father took an insane number of pictures when i was a kid. like, insane even by today's standards and we're talking pre-digital back then.

he would shoot with three different cameras simultaneously, so that every major event of my childhood can be experienced in multiple mediums- color, slide, and black & white.

what constituted a major event was also open to liberal interpretation. birthdays. christmases. blowing bubbles. pajamas and a porcelaine elephant. reading in bed and licking cake batter off a spoon.

each major, each artful, in its own way.

it is a testment to the importance of photography in my family that i received my first 35mm camera at the age of four.

the first photograph i ever took is of my father sitting on the steps of our house in annesdale park. in this picture, you can see the gray steps, the black railing and the left side of my father's body from shoulder to forearm, encased in a brown nylon jacket. there is a shakiness to the image that suggests a bird might've just flown through.

by the second shot, taken only minutes later, my composition skills have made remarkable improvement. my parents pose together on the steps of our house. my mother is wearing a green cardigan with a neckerchief. they are standing on the top step. i am something like two feet tall and sitting cross-legged on the ground so that they appear as giants.

my father stopped taking pictures during my adolescence. this was at least partly my fault as i was so uncomfortable with myself that i would purposefully ruin his shots with sour facial expressions. i did not think i was pretty and i thought it was a waste of film to capture anything less than beautiful.

my own relationship with photography has ebbed and flowed over the years. there was the initial enthusiasm that summer in cornell, but i think that had more to do with the prospect of being in a dark room with a boy than actual interest in the art. ditto the brief fling with film the following year.

but, when you remove men from the equation and the inevitable fear of appearing pretentious, my relationship with photography has run in direct correlation with my ability to slow down, to keep calm. it is about being present, in a way that writing is not.

photographs are a different way of taking things in. just as a writer rolls a sentence around in his head before grabbing a pen and writing it down, so you see the sunset with the naked eye, you frame it with the lens, you pull the shutter and put it down on film. but in writing, you edit after the sentence is on the page. in photography, you edit at the outset, because you get no second chance.

there was a moment in paris atop the tour de montparnasse. i have written about it before and my awareness that we would never be back there like that again. it was the dawning of my determination to never ever worry about what comes next and instead enjoy each moment as it is. accordingly, it was a moment that i was fiercely adamant everyone must enjoy with me. LOOK at the beauty! i said. LOOK.

i have found myself saying this with alarming frequency in the year since. during the three day commute to colorado, i pointed out to the philosopher every effing windmill we passed. in copenhagen, i brought more attention to the danish dentil molding than it had probably received in years. LOOK, i told my mother. LOOK. even on the road trip to aurora, i admonished k.clen to ignore the traffic. LOOK AT THE CLOUDS! i repeated no less than 95 times.

i do not know what to do with this. i am torn between thinking i might be on to some deep, new way of living and really really wanting to make fun of myself.

i am being ted baxter. that is never good.

it is ridiculously simple. looking. and yet, we do it so seldom. we miss so much.

i realize now why my father gave me a camera. why he put that little pink kodak ektralite 10 in my four-year-old hands and sat on those stairs and said, bearoline, look in the window. the beautiful goes through there.

he wanted me to be sure i would see.

if my family can be said to hold any philosophy at all it is that there is infinite wonder to be found in even the smallest moments. birthdays and christmases. danish windmills and midwestern sunsets. porcelaine elephants and fuchsia sweatsuits. staring at beauty through crappy cameras.

these moments, they are life. LOOK. the beautiful goes through there. 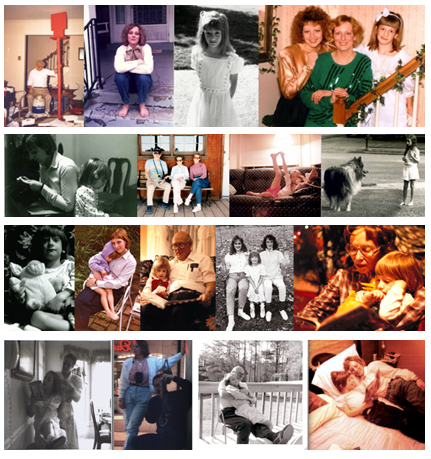 Email ThisBlogThis!Share to TwitterShare to FacebookShare to Pinterest
filed under: gary, photographie, the family forward

Again with the posts that make my eyes water. What's with that?

it is my life goal to make you weep.

and THAT should be needlepointed and hung up in your living room.

is it coincidence or Divine Hand of Fate that I was listening to Big Boi's "Shutterbug" when I clicked your page?

Love this. and love your consistent admonishments to look. As I drove into the city today and marveled at the skyline... and then told my co-worker she should too. I give all the credit for this moment to you. :)

yay, k.clen. that makes me happy!