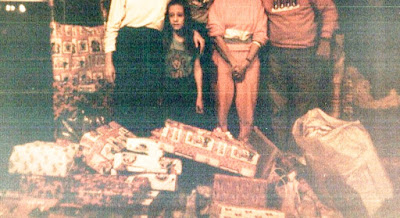 we eatons are very particular about our christmas traditions. out of my 29 christmas eves, 27 of them have gone like this:

there was one time in the late 80s when my grandmother's sister's family came to memphis. they were due to arrive late christmas eve and this was seen as a monumental disruption of tradition.

in the early days, every year, we would blithely pose for pictures in front of the mountains of presents. those photographs survive as testament to the fact that we are a family of givers, to a problematic extent.

every christmas as far back as i can remember, my father has announced that it will be "The Year Of The Big Cutback." it is a long-running joke, primarily because it has never come true and every year- cutbacks be damned- we have exchanged a huge pile of presents as my father dolefully shakes his head.

this year, right on schedule at thanksgiving, he yet again announced that it is "The Year Of The Big Cutback." it must be a sign of impinging adulthood that, for once, i found myself in his ranks.

our upcoming christmas is a somewhat unsettled thing. my aunt and uncle and three cousins may or may not be there. a circumstance that most likely will not be determined until the final hour, thus keeping us all in a suspense that will either end in last minute mississippi frenetics and the usurping of all family christmas traditions or a venue switch to memphis amid crushing grandparental disappointment.

in the face of this, my father is espousing "The Year Of The Big Cutback" with renewed vigor and, after fielding the question but what DO 17-year-old boys want? from all quarters, this year, i'm inclined to agree.

the only other thing i remember about that christmas where my grandmother's sister's family came, is my grandmother saying that they didn't really celebrate christmas. because instead of gifts, they gave money. at the time i looked at my grandmother in awe and wonder and asked, but gran, what do they open?

though they're more than happy to share the wealth otherwise, my family does not gift money. paint-by-numbers and blocks of wood with the name JESUS carved so that it can only be seen when you're standing to the right at a 45 degree angle and 10 feet away? hell yes. money, never.

so it was a rather bold move when, on my younger cousin's behalf and in an effort to spare them the ordeal of miming excitement over select items from the tupelo, mississippi barnes crossing mall kirkland's clearance rack, i suggested they would probably appreciate money more than anything else.

a bold move with unanticipated consequences.

because this suggestion, coupled with my scandalous unmarriedness and the fact that in trying to expand the worldview of my family of upper middle class southern christian conservatives in a way that will not incite a repeat of the great Oline Versus The Whole Entire Family On Why Heathcare Maybe Is a Human Right And Not A Privilege Debacle of 2008, i tend to cast myself as the heroine of social dramas in order to make eye-opening valid points like, wow, it really sucks when living costs rise and pay doesn't! or hey, healthy food is expensive!, has created the sense in my family that i am, secretly, poor as dirt.

thanks to a rogue statement at the thanksgiving table about the rising costs of dairy, my grandmother and grandfather later separately slip me ten dollars each so that i might buy milk.

after my lamentations re: the cost of eye cream, my mother comes into my room with an armful of beauty gels and perfumes and poultices. she lays them at my feet.

as i'm going to the airport, my father slips me forty bucks for the taxi.

this is the final straw.

i make "stop where you are" hands and protest that i am a strong and independent woman and can ride buses and trains and take care of myself. then i humbly accept the handout.

but then i land in chicago and i'm exhausted and my luggage is three times larger than when this trip began and i can't help it. i give in. to extravagance and unnecessary luxuries and the idea that we needn't cut back.

Email ThisBlogThis!Share to TwitterShare to FacebookShare to Pinterest
filed under: burvil, gary, the family forward

such a sad-oline in this picture! was christmas just as frightful to wee-oline as was halloween?

this was during the christmas carol years so having not slept since 1985, i was feeling particularly dickensian.

i'm also intrigued by the gift on the far left. it appears to be a loom. which, while not altogether inappropriate for certain members of my family still seems hilariously antiquated.

oh, i thought that was someone in colorful pajama pants and a black-shirt.

wow. it really does look like that. i don't know whether to be pleased or deeply offended that you think someone in my family would wear such colorful pajama pants.

I will keep this as clean as I can but unfortunately there is nothing Santa has that fulfills the answer to what DO 17-year-old boys want.

given that my grandmother has already informed said 17-year-old boy to, and i quote, "keep your pants on and your belt buckled"- i think it's safe to say he is scarred out of wanting that for awhile.

There is no Power on earth (grandmotherly or otherwise) that will safely derail a teenage boy's mind away from that. We're talking about walking human-shaped thermoses of hormones. At best you can hope for a brief distraction of say, video games, extracurricular sports or, I dunno, the apocalypse.

ah, that is where boys and girls are different. my grandmother didn't even say that to me and it was enough to make me want to puke and claim abstinence for life.