female friendship is a funny thing. on one end of the spectrum, there are the mean crazy psychos who won't let you wear leopard-print. on the other end, there are these amazingly wonderful other women with whom you feel a connection that is very hard to articulate outside of the observation that it is an emotion not unlike first love.

we're in the naked lady bar (and just a warning, we're going to be in the naked lady bar a lot from since this is where the Big Ideas are being born) when sensei tells a story about how a roommate of his once returned from a night out looking all moony and starstruck. she said she'd met her soulmate. she was speaking of a girl who would later be her best friend.

i didn't give this too much thought until, purusing through 1994/1995 for the next young oline, i hit the first time partner and i hung out. listen closely and you can almost hear the angels sing. 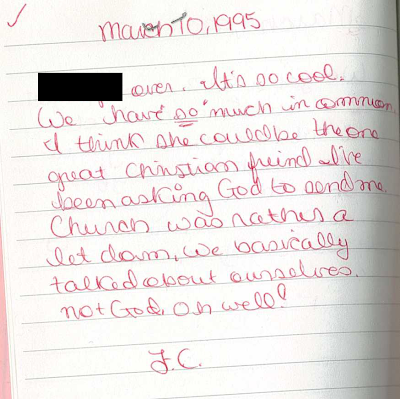 [trans.: XXXX's over. It's so cool. We have *so* much in common.
I think she could be the one great Christian friend I've been asking God to send me.
Church was rather a let down.
We basically talked about ourselves. Not God. Oh well!]
by oline

let's also reflect on the fact that we talked about ourselves rather than God.

Also, I'm glad I'm not the only one who is getting all their Big Ideas from the gloom in the naked lady bar.

wow. that is high praise. as old oline, i will proudly accept that award on young oline's behalf.

and i'm pretty sure the naked lady bar and the new yorker subscription are entirely responsible for the recent increased output. so we can never stop going now.

I hear them too.

damn i miss u dudes.