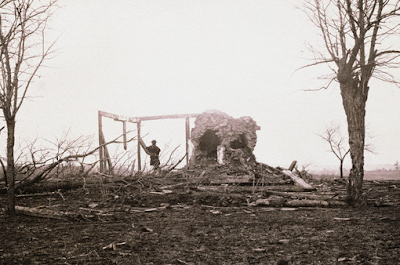 we are trying to write about the south. sensei and i. it is not an easy thing and we do not want to do it.

we are sitting in the naked lady bar talking about the south when dananator says again that this is what we must write about. when she asks why we cannot, we launch into faulty metaphors that lead nowhere but that same phrase we've said before. we shake our heads and, with the resignation of celebrities justifying their hijinx to matt lauer, we say again, you don't know. dana, you just don't know.

sensei is our source for all things japanese. dananator has read something about the japanese suicide forest and she asks him about it. she is referring to aokigahara, an inaccessible stretch of rugged land in which people disappear to die. the part that gets her is that most of them are never found. they are lost forever in the woods.

when sensei talks about how the bodies swing from the trees, dananator shudders. she says, i do not want to confront extant remains.

she says this and i laugh. because it reminds me of home.

the south is riddled with extant remains.

a statue of nathan bedford forrest sits atop his grave in memphis. the mayor has, on several occasions, interceded to prevent it from being taken down.

the first african american mayor of memphis protecting a monument to the man who created the ku klux klan.

carnton mansion is famous for having had the bodies of four confederate generals laid out on its front porch following the battle of franklin, in which there were 8,578 casualties.

according to their website, you can get married at carnton and treat your guests to "a true back-in-time experience," bloodstains and all.

sensei has very aptly likened the south to a haunted house. he has made the observation that "the history of the South is a tragedy, written in blood and shadow, and it’s hard sometimes to not feel like a bit of that’s settled on our sleeves like a thin layer of dust."

i would argue this is the crux of the problem. we should have cleaned that shit out long ago. this blood and shadow that has settled on our sleeves. the stains on our porches. the statues in our yards.

instead, we let it sit, let it fester, like the broken plastic lawn chairs and abandoned big wheels and discarded toilets that liter the yards along highway 371. so that it is no longer an eyesore but a part of the landscape.

it is no longer an eyesore.

it is a part of the landscape.

we no longer even see that it is there.

dananator wants us to write about this. she asks why we cannot.

if the american high school education system were a thing in which one could put one's faith, i would assume everyone has read "a rose for emily" and say that dananator is asking us to pull an emily grierson.

but i don't know if you have read it. you may not have any idea what that means.

and so, instead, i will say this.

we are sitting in a haunted house, sensei and i, drinking mint julips alongside extant remains. we've spent our lives being careful to stay still, not to rattle the ghosts.

dananator's asking a lot. she's asking us to dance in a room of bones.
by oline

Email ThisBlogThis!Share to TwitterShare to FacebookShare to Pinterest
filed under: deep deep thoughts from the naked lady bar, sensei, southerners in the city

That's it. I'm going. I don't care if my Yankee curtness lands me in a stockade in the middle of the town square, I'm still going to go, somehow.

Also: criminey. How is it that after one drink at our writer's meetings my mouth has difficulty finding my straw, but you can make profound connections between Aokigahara, "A Rose for Emily," and the sociopolitical landscape of the modern south?

Next time, I'm drinking what you're drinking.

i've said it before and i'll say it again: FIELD TRIP. and the second whiskey sour is the key.

There was a very intriguing discussion of the "southern fuck you" on a local radio morning show. Basically one of the DJs was saying how they began in the business by moving to Nashville. And on one of the first days there he upset a man on the street. The man said,

The DJ then walked off thinking how weird the experience was until it finally clicked that he had just been given the most devastating "fuck you" he'd ever encountered.

Aside from this quasi-random story, this is one of my favorite Oline in the City posts of all-time. And I been hurr since the b'ginning.

i feel like that story pretty much sums up the experience of non-southerners in the south.

I felt that way when I was in Indiana anyhow.

You gave me one of the greatest compliments I've ever received when you said I could make an honorary southerner. I'm not sure I believe you, but still.

I've also heard about the "bless your heart" phenomenon. I wonder how many times my heart will be blessed during our fieldtrip.

As for Indiana, yes, surprisingly southern! Once I went to a wedding in Bloomington, got terribly lost, and pulled over to ask directions. The lady who gave them to me answered me in this incredibly thick southern accent. As I was pulling away, I thought to myself, "Huh - she must not be from around here." Some time later, still lost, I pulled over again, and encountered a man with the ,exact same accent. Then it clicked. I was playing chicken with the Mason-Dixon line.

As a native of the great state of Indiana and someone who has also resided in the armpit of the south (otherwise known as Arkansas) I would just like to state that the northern portions of Indiana are slightly less southern- but still entirely awkward and weird.

ohmygod ohmygod. Revelation. I was BORN in Indiana. And Indiana is the stealth South! This must be where my odd obsession with the South comes from. I was whisked to Michigan soon after my birth, and so lost touch with my southern roots. Subconsciously, I have been trying to come home.

I am a cultural tumbleweed. I am a girl raised by wolves. I wander in exile, searching for fish shacks and...whatever else they have down there.

Can't believe I just now put that together.

oh dears, bless your hearts. indiana is not the south.

It's not even close.

The South - not Northern Ireland, yet, your point - deeply understood.