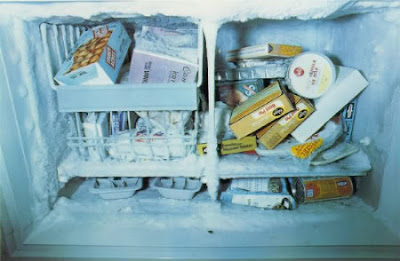 in maph, dougo and i were at this party, standing in the corner by the fridge. i don't remember whose party this was. all i remember is that someone came to get ice from the freezer and, as they opened it, we could see a package of popsicles nestled inside the door. and that dougo and i spent the remainder of that party talking about those popsicles.

we were living on pasta-roni and ramen at the time. if our freezers contained anything, it was frozen pizza. we certainly did not have popsicles. we would not have even thought to have popsicles.

popsicles were such an indulgence. so decadent. they seemed to us then so terribly adult.

well, we're all adults here now and the times are no longer quite so lean. my freezer presently boasts popsicles of multiple varieties and it is filled to overflowing.

this is thanks, in large part, to the fact that everyone i know moved away this summer, leaving to me their abandoned frozen foods. and not only theirs but those they had previously inherited. when you are abandoning ship there is apparently this universal impulse to throw your frozen foodstuffs to the people you leave behind.

because a night in which i will need to store four cakes in my freezer is coming up, i've begun systematically working my way through this food. and because my creepy memory gives me a pretty good idea of the freezer from whence each frozen thing has come, what should have been a simple fridge purge has become a sentimental journey.

for instance, when i made vegetable stew the other night, i knew it contained not only the philosopher's edamame but the okra of his friend from champaign. she had brought it to him the night before she moved. it was the first of three nights where we stood on a balcony watching fireworks go off in the western sky.

this is what i'm thinking about as i stand there, stirring a shit-ton of creole seasoning into a pot of so many vegetable combinations that jessica seinfeld would weep for joy. i am thinking about that night and the life these vegetables led before me. i am likely not thinking clearly because it is a notion that strikes me as the most romantic thing in all the world.

i am attributing meaning to something that was a mere convenience.

and yet, there is a reason why i am doing this.

my grandparents live in mantachie, mississippi, a region of the country where vegetables and fruits are so plentiful that people will literally give them away for free. not only dear friends but also your arch enemies. in mantachie, come harvest time, your nemesis will haul over a choice selection of his green bean crop. you will give him your extra blueberries and, briefly, you will be the best of friends, brought together by the bonds of abundance. the very great need to dump your overage on someone else.

and so my freezer not only contains the vegetables of midwesterners who have moved. it also holds a significant cross-section of the crop yield of my grandparents' friends and foes from the springs 2007-2010.

all in ziplock freezer bags. all dated. all signed by the people who picked them, like how quilters stitch their names into the hem.

i've been inheriting other people's produce my whole adult life. but it has always come with a story, with a date and a name. aunt hazel's corn even comes with an inscription to me, as though someone had queued up for hours in a field holding a plastic bag and a pen, begging the corn queen for a personalized autograph on my behalf.

though i've been supplementing my produce stash with store-bought vegetables for years, there are still moments where these impersonal vegetables from unidentified farms strike me as incredibly strange. but then i reach into the freezer for a bag of sweet potatoes that my 80-year-old grandmother dug up at the sprattling farm in september 2009 and, again, all is well with the world.
by oline

Email ThisBlogThis!Share to TwitterShare to FacebookShare to Pinterest
filed under: the family forward, the philosopher