say you're sitting in a sports bar with twelve TVs and two friends. you are trying to remember the chronology of a long meal you once had together. you do not know you have broken this one meal into three separate nights, misidentified the main course and incorrectly placed it as occurring somewhere in the middle of may.

and then the friend who is sitting on your right because she cannot hear on your left says, well, ACTUALLY, remember that was the night that boy dropped me off at the curb in his black car and you made eyes at me when we met outside of art effect like you knew i'd been doing naughty things but we never discussed that and instead drank a pitcher of sangria at tapas and sat outside eating chocolate ice cream cones with rainbow sprinkles at annette's though it was 43 degrees out and none of us had a coat and then- remember?- we went to that fancy french place we thought was a wine bar but was actually a restaurant so we sat there drinking a bottle of red and fielding dirty looks from that waiter who had the freakishly long pinkie finger and whose pants were too tight then we wound up at that irish pub on the corner near the greek restaurant where you helped that girl find her lost earring and i had the gin and tonic that was all gin and no tonic and you guys were so late getting back to the train that you called me the next morning to tell me you'd stress peed on the way there? yeah, that was TOTALLY april 17th. and the sushi was MUCH earlier. like, on saturday, march 6th.

you would kind of hate that friend, right? be honest.

because, hello world, i am that friend.

in the tipping point, malcolm gladwell makes an assertion, which i'm going to do a bastardly job paraphrasing, that there is a division of memory in every relationship. that each person is responsible for remembering a certain set of different things. using a gender normative, exceedingly simplistic example, let's say lindear is responsible for recalling the quickest route to sonic and mr. lindear is responsible for knowing how to assemble the french press. if she knows how to get to sonic and he knows how to assemble the french press, neither of them need ever learn what the other already knows. together, they are able to make coffee and find tater tots, thus satisfying the two most important needs in all of life.

i like gladwell's theory. because i retain crazily small details and this theory casts a certain degree of benevolence upon what would otherwise be creepy in the extreme. if i remember all these things, it's because i have discerned that in the division of memory in our relationship, that is my role. and, therefore, while lindear may remember the way to sonic, it's my job to remember that, when we first went there, she was wearing a black satin buttondown shirt emblazoned with a gold serpent down the front and that she got a route 44 limeaide on which the lid was not properly secured so that the entire thing blew up in her lap when we went over the railroad tracks.

i want gladwell's theory to be true because it means it's totally ok that i know so little about the wire, young adult fiction, the economic policies of george w. bush and the chicago public schools magnet schools lottery admission system.

hey, i remember what we ate and wore and the calendar date of everything we ever did. the rest of that stuff? yeah, that's your job, not mine.

i blame my eerie ease of recall on two things:

from the womb, i was fated to be a biographer. much like one is born to be queen, it is the destiny i must fulfill. thus, my brain is a machine specifically engineered to recollect extremely specific, biographically important small details at the expense of all else.

2) this very blog you read every day

the blog posts you read once, if at all, here have been read by me at least a zamillion times before they ever get to you. the details surrounding their composition are seared into my mind forever after, so that when the philosopher asks when his friends came to town last june, i'm able to say with certainty that it was on the 22nd, because i know that night i went home and wrote that sweet valley high post that went up on the 24th. i swear, i wasn't nearly this creepy before i had a blog.

in summation, this is all your fault, dear reader. and God's.

the queer thing is that as uncanny as my memory may often be, it all too often skims over the really really important things. so while i can remember that partner was reading elizabeth wakefield's diary and i was wearing white shorts and a green t-shirt and keds without the laces when we first met at page middle school in ms. dugger's homeroom in september of 1994, there is so much else that i continually miss. i can never ever ever, for example, remember that gossip girl comes on mondays at 8 p.m. 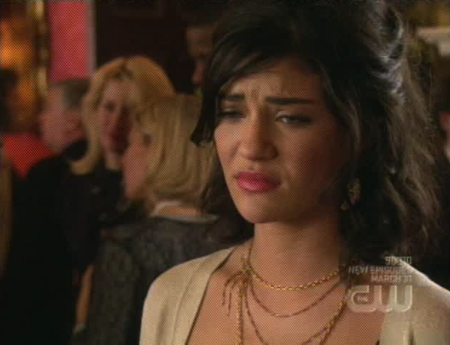 Email ThisBlogThis!Share to TwitterShare to FacebookShare to Pinterest
filed under: creeps in the city, lindear, psycho

i wish i could manifest an emotion as powerful as the sheer disgust on what's-her-nugget's face in this post.

Also you are like the least creepy person I've ever met.

Also, you're damn right mentioning the wire is going to get me to post. It's like I have a homing device in my brain which knew where it could find a mere casual aside. well played, Oline, well played.

yeah, that was just for you. so i guess i owe croftie an apology now.