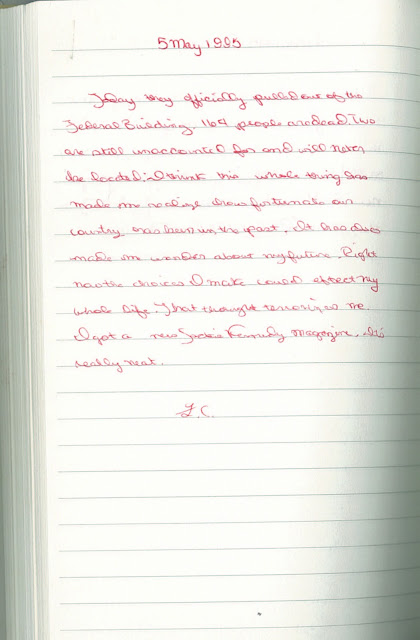 [trans.: "Today they officially pulled out of the Federal Building. 164 people are dead. Two are still unaccounted for and will never be located. I think this whole thing has made me realize how fortunate our country has been in the past. It has also made me wonder about my future. Right now the choices I make could effect my whole life. That thought terrorizes me. I got a new Jackie Kennedy magazine. It's really neat.
F.C."]

i try not to write over young oline. i like to let her speak for herself.
because that's how i see her- as this whole other hilariously melodramatic person whose writing reflects the awkwardly awesome impact jane austen and too much cnn headline news can have on a silly girl. yes, young oline was me but she's nothing to do with me any more.
croftie and i've discussed this- this fierce protectiveness and pity we feel towards these girls we used to be. i'm doing a crap job of explaining it here. go read your old journals and you will see. it's not you, but it was, and that's weird.
but suffice it to say there are places in my journals every now and again where i can see pieces of who i am now peeking through from who i was then. 5/5/95 is one. because in the seemingly enormous shift from "Right now the choices I make could effect my whole life" to "I got a new Jackie Kennedy magazine," there's a teeny tiny kernel of ironic impending truth.
the choices i made then effected my whole life. who would i be without jackie kennedy magazines?
by oline