a thought that is not fully formed,
but which makes up for such lack
by being both controversial and fully half-assed. 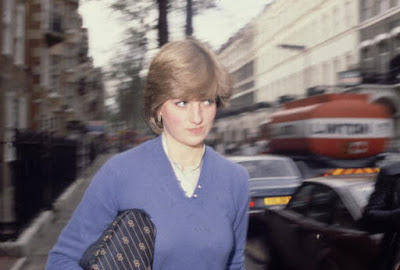 my motivations toward princess diana were never pure. i was never interested in her for her own sake. it was more a nostalgia for the present, an awareness that a historical moment might be unfolding about which i might later deeply care. there was always the possibility that she might be The Next Jackie. having already missed the real one, i was fully determined to experience the next.

and by the phrase "The Next Jackie," i don't mean that princess diana shared any of the traits for which mrs. onassis was known. even at the age of 13, the designation simply meant that she covered on a hell of a lot of magazines. because even as i sat at the center left front row of ms. boyd's 9th grade geometry class reading lady colin campbell's diana in private: the princess nobody knows, magazines were all that mattered to me.

i do not think princess diana was very important. SHOCKING, i know. there are many things you could say to try to convince me otherwise. i know them all because i've written them down here and deleted them again and again and finally shoved them into a separate post that i'm choosing to ignore for the moment because all those arguments miss the point. the point being that i don't think princess diana was very important.

so, suffice it to say, we are discussing a historical figure about whom i really care very little and for whom i have very little respect. which makes it rather curious that i am fanatically obsessed with reading biographies about her. and not simply reading them mind you, but rereading them. with much the reverence one would typically associate with oft-viewed classic films.

it occurred to me the other day that because i have read it at least twice a year since the summer of 2003, there is a distinct possibility that i have read sally bedell smith's diana in search of herself as many times as- if not more than- pride and prejudice.

please know that i am not proud of this. i wish it were not so and, since having this revelation, i have devoted a considerable amount of brain space to figuring out why it might be true.

the reason i have arrived at is this: the biographies of princess diana have- by and large- been written by women. this should not make a difference. in the end it really does. and so, in studying how to write a biography of a woman, i have read these books about diana again and again.

because diana has, at least since her death, warranted serious biographical study by serious female biographers. she is looked upon as a woman who is interesting in her own right. someone who's marriage was an important part of her story but who did this brilliant, brave thing in standing up to the british monarchy and changing it for all eternity to come.

from my place in the jackie bell jar, i think it comes from the general ambivalence that continues to surround jackie's place in american life. she is eulogized as "america's queen"- an extremely awkward thing to be in a democracy. nonetheless, i would argue that hers was the most important female life of the american twentieth century. and i would go to the mat on that. (realizing i am probably the only one.)

i do not like that. i don't know what to do about it, but be aware, for what it's worth: i do not approve.

Email ThisBlogThis!Share to TwitterShare to FacebookShare to Pinterest
filed under: biogrophiled, half-assed things that don't really fit anywhere but i am nonetheless done with, la royale, lady di

Side note: You know Ms. Boyd got fired, right? So did Mrs. Pavlick (she was banging Mr. Adams).

OK. WAIT A MINUTE. ms boyd i knew. but MRS. PAVLICK? MR ADAMS? that has blown my mind. seriously, there was ms dugger and mr flemming AND mrs pavlick and mr adams? you wouldn't imagine there would be nearly so much bed-hopping in a school located between two cow farms. but then, maybe you would...

and that was in no way a gratuitous use of capital letters. that was SHOCKING.

I thought I had told you about Mrs. Pavlick and Mr. Adams... Apparently it was the D.C. trip that was their downfall.

i may very well have blocked that out. because it is horrifying on too many levels.

I can confirm that Meggie did indeed tell you within the confines of this blog about Pav and Adams. Because that's how I learned about it, yo.

What was Ms Boyd's downfall? Besides being the worst AP US History teacher Of. All. Time.

Linda--wrong Boyd. Boyd was the 9th grade math teacher at Page. She got fired for being a heinous bitch. No, seriously. So many parents complained about her and it was her tenure year so they ended up just getting rid of her.

lindear wasn't with us that year. and i feel like our high school career featured an odd lot of tenure drama.