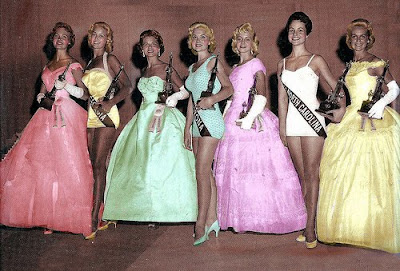 an especially loooooooooooooooooooooong while ago (since i've been wrestling with this for three months), over burgers with the philosopher, the conversation came around to my childhood love of the miss tennessee pageant. an innocent, surprisingly sexist affection from a time upon which i have always looked back with great fondness.

but when the philosopher asked why i had watched the pageants, i really had no idea.

after an inexcusably long stretch of introspection, i still do not know.

mind you, my pageantry was specific to the state of tennessee. i didn't care two beans about america or the universe or the pageants conducted by the 49 lesser states. tennessee alone captured my fancy, a circumstance rendered mildly ironic by the fact that i was living in georgia at the time.

because i was a non-resident, every year during the three or four year stretch that the miss tennessee pageant was of extreme cultural relevance, my grandparents would record it. upon arriving at their house for my extended summer stay, i would find the tape loving laid out upon my bed, nestled in a small pillow of scrap chiffon. as though it were an expensive gem rather than a maxell e-180 vx vhs.

my grandparents went to church with someone who actually was miss tennessee. libby reminded me of this when i grilled her on our shared affection for pageantry. because she was in this with me. each of these summers, she would come over and we would don spare sheets and fabric scraps and troll about my grandparents living room in elegant mimicry of the collegiate beauties swanning about the stage on tv.

my love of reenactments is either to blame for this or derived from it.

either way, we did this a lot. to the extent that when remembering my summers at their house, my grandparents will always evoke the times libby and i pretended we were miss tennessee.

i come from a family that encouraged all things pretend. they turned a blind eye to the petty theft of their nightgowns and costume jewelry and dictaphones. they did not question how i got a broken arm going up the stairs. they let me mime ice skating on carpet in socked feet. they always, always knocked on closed doors. and behind those closed doors, they encouraged me to build a world of limitless possibility.

which is what those tapes on that bed represented. possibility. i could be in a pageant! just as i could be the next bob ross or the new agatha christie or a veterinarian or van cliburn.

they always said i could be whatever i wanted. it's a typically 80s sentiment, but as i get older and go out in the city in fur coats and viking hats fumbling my way towards being a biographer- more and more- i appreciate how wondrous that is.
by oline

Email ThisBlogThis!Share to TwitterShare to FacebookShare to Pinterest
filed under: half-assed things that don't really fit anywhere but i am nonetheless done with, retro

This makes me smile.

you people are so classy what with your bathing costumes. in my family- thanks to little girl oline's inability to say anything right ever- we called it a skin suit. which strikes me as more porny with each passing year.