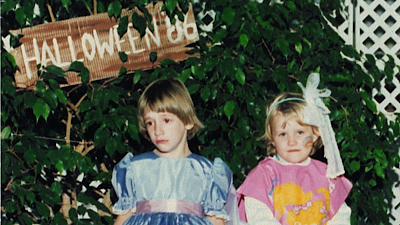 halloween was never a particularly big deal in our house. the third grade book fair pageant for which my mother crafted pig tails from brown yarn, painted my keds red, and dyed a white stuffed dog black so i could carry it in one of my grandmother's antique danish breadbaskets and be dorothy gale, YES. but halloween, not so much.

we lived at the end of a long driveway that left us stocked with cauldrons of chocolate that would reappear in christmas stockings and easter baskets because only half a dozen trick-or-treaters ever made it to our door. so in the mid-90s my parents' half-hearted enthusiasm hardened into disgust and we became those people who went "lights off." misers enduring the night in darkness because we could not handle the implication that our candy wasn't worth the slight inconvenience of an overly long lane.

that's not to say there weren't costumes. i, of course, spent most of the 80s and 90s staging socked feet theatricals behind closed doors. and my mother dressed up as glenda the good witch a couple times for work (we've a bit of an oz obsession), but that was in the context of conferences and in the interest of governmental employee morale. i don't think it was ever for halloween.

but this year, thanks to my parents' involvement in the children's ministry at church, halloween fever has overtaken them. last week, they went to mississippi specifically to scour the farm for costuming. in relating their adventures to me, an image emerged of them running about the cottage and the workshop and the barn and the storm shed with my gran and grandfather in tow. a sneaky smile on every face. a pile of frippery in every pair of arms.

thus, my mother's glenda the good witch will be wearing tulle from the bridesmaids dresses of my aunt's first wedding and my father's pirate will be toting a pistol fashioned from the leftovers of my grandfather's hobby of carving the name JESUS into blocks of wood so that it can only be seen when you're standing to the right at a 45 degree angle and 10 feet away. like those posters that look like marbled cheesecake, but if you squint hard enough a dolphin or a fairy or the face of al gore is supposed to emerge.

in a curious twist of fate, for halloween this year, i am going to be a musketeer. a good pirate. perhaps the best possible costumic mash-up of my parents' pageantry.

my father- who has begun more and more thinking in the context of facebook profile pictures- looks upon this as the greatest possible turn of events in the history of the world, and has gone so far as to suggest that the dainty mustache i have planned be replaced by a full-on beard for the sole purpose that he can then put our pictures together side-by-side to showcase how perfectly alike we are.

my father- who always sided with my mother in the years-long argument that prevented me from ever being a witch for all hallow's eve (hence the sadness in the photo above where i was forced to be a fairy)- is now actively boasting to people that his daughter is going to be a man for halloween.

this depresses me.
by oline

and your dad is right. the juxtaposition of those photographs is totally facebook necessary.

wow. i didn't realize the JESUS thing had gotten so out of control. i will say the christmas we all got JESUS blocks was among my most disappointing.

that is the saddest Oline ever.

That picture is hilarious (with apologies to youngoline for finding mirth in her pixie dust sadness).

all hail lindear, who helped pick it out.

and what can i say. i really, really wanted to be a witch.