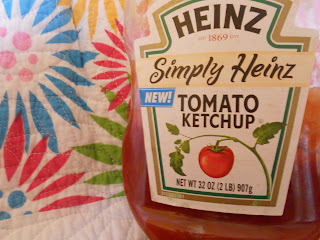 in nursery school, everything we ever ate came with ketchup. the idea being, if you didn't like a particular food- say eggs or grits or green beans- you could put ketchup on it and that would somehow make everything ok. apple sauce had mildly comparable powers but was not so universally efficacious. it could make the beans bearable, but that was about it. in contrast, ketchup could do it all.

so i was already a believer when, in the aisle of dominick's, deciding whether to sacrifice salt or high-fructose corn syrup, i went with heinz organic and discovered that this is The Ketchup Of Our Lives.

because i tend to be rather exuberant in my enthusiasms- as evidenced by the frequency with which i use the phrase "Of Our Lives"- everyone who has subsequently hung out with me has heard about The Ketchup. thanks to its goodness and my inability to turn down dares, i'll be packing a bottle for halloween.

because, people, The Ketchup is seriously good.

at some point in the summer, i presented the philosopher with a bottle. because i'm southern and take exorbitant delight in making people eat, i bequeathed it with a solemnity that struck me even then as borderline blasphemous and which, while it might have been appropriate for the giving of the holy grail, seemed somewhat excessive fuss for a condiment.

that bottle later made the trip to colorado and, in iowa, we sat on the back of the car in a burger king parking lot drowning our burgers in The Ketchup we'd brought from home.

the thing about The Ketchup is that once you've had The Ketchup, you know how much better everything could be with The Ketchup. i realize this is the argument of drug addicts everywhere, but trust me, it's truthy.

this weekend, the philosopher and i went to a wedding. in the midst of eating what- in other circumstances- could have been The Chicken Of Our Lives, the philosopher leaned over and said, this would be so much better with The Ketchup.

an observation rendered somewhat excruciating by the fact that, because we'd brought it along for the mcdonald's we'd had for lunch, The Ketchup was now conveniently, tantalizingly located in the car at a distance it would not have been unreasonable to traverse in the pursuit of perfecting poultry.

but we are a dignified people. and having arrived twenty minutes late for a wedding where we then spent an unreasonable amount of time trying to figure out if we were, in fact, at the right one (people look alarmingly unlike themselves from behind), we allowed that running to the car in the middle of the reception and returning to the country club with a 32 oz./2 lb. squeeze bottle of simply heinz might have been a little much.

a little much, but he wasn't wrong. it would've been so much better.
by oline

Email ThisBlogThis!Share to TwitterShare to FacebookShare to Pinterest
filed under: mmmmmmm mmmmmmm good, The Ketchup Of Our Lives, the philosopher

i must really love you, because you know how i feel about "the ketchup" and i read the entire piece. and enjoyed it. but i still have to say...

absorb (emphasis on the "s")
moist

we are almost even.

i appreciate that you had to read 500 words on ketchup to realize the depth of your love for me.

what is wrong with you people?