i no longer keep journals. instead things are just jotted down at random on whatever paper is available- be it a book cover, a post-it, or a wirebound, wide-ruled mead. some of these things turn into things that show up here. some of them don't. this one didn't.

things went rather rotten in olineland last fall and winter. later, from the depths of my despair, i would look back on the event described here as a harbinger of  oncoming doom and attribute to it way more significance than it probably ever deserved. as evidenced by my writing it down.

i know for a fact that it happened on the saturday morning of labor day weekend 2009. i do not know when this fragment was written. i'd thought it was somewhere in january but in the trusty mead, it appears between THIS and THIS, with the post from march 4th written 5 pages before the one from february 22nd, so that proves nothing, except that this happened and it stuck with me enough that 5-7 months later i put it on paper. 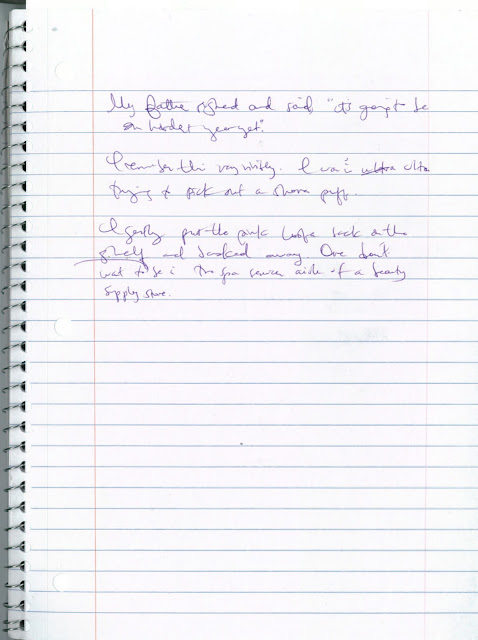 "My father sighed and said, 'it's going to be our hardest year yet.'

I remember this very vividly. I was in Ulta trying to pick out a shower puff.

I gently put the pink loofah back on the shelf and backed away. one doesn't want to be in the spa services aisle of a beauty supply store."]
by oline

I think your handwriting is progressively getting worse as you get older...

yeah, it is. that's my favorite part of christmas cardding (aside from the sharing of joy and goodwill and whatnot). the fact that all my friends are reminded that i write like a psychopath.

I still knew you were totally ridiculous, but thanks for the reminder. Love you!

i'm pretty sure shared ridiculousness is why we're friends.