2 "so many miseries of the world would be solved if you didn't have to associated with other people."

in the winter of 1996, i was briefly- for exactly one day- recruited to play the bells in the centennial high school marching band. this came about as a result of a very great misunderstanding in which a friend of mine tried to coerce me into being in band, i declined, said friend wrote my mother a note telling her i wanted to be in band, my mother misinterpreted this as an actual desire on my part to be in band and accordingly signed me up for band. unfortunately, as i had originally stated, i did not want to be in band. a truth that, once revealed, led to all manner of emotional fallout, as things like leaving the band usually do, and further reinforced my conviction at the time that people, by and large, totally suck. 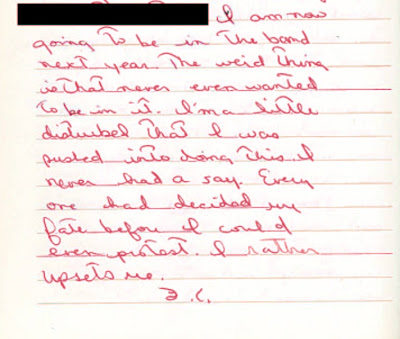 [trans.: "I am now going to be be in the band next year. The weird thing is that I never even wanted to be in it. I'm a little disturbed that I was pushed into doing this. I never had a say. Everyone had decided my fate before I could even protest. I[t] rather upsets me.
F.C.] 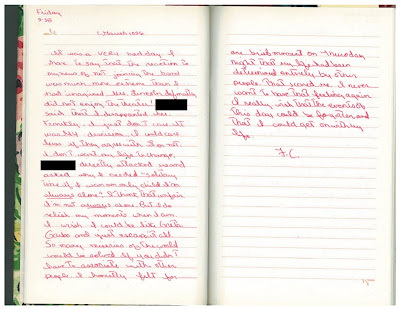 [trans.: "It was a VERY bad day. I have to say that the reaction to my news of not joining the band was much more extreme than I had imagined. Mrs. Lincoln definitely did not enjoy the theater! XXXXXXXX said that I disappointed her. Frankly, I just don't care. It was MY decision. I could care less if they agree with it or not. I don't want my life to change. XXXXXXX directly attacked me and asked why I need 'solitary time. if I am an only child I'm always alone.' I think that unfair. I'm not always alone. But I do relish my moments when I am. I wish I could be like Greta Garbo and just escape it all. So many miseries of the world would be solved if you didn't have to associate with other people. I honestly felt for one brief moment on Thursday night that my life had been determined entirely by other people. That scared me. I never want to have that feeling again. I really wish that the events of this day could be forgotten and that I could get on with my life.
F.C.]
by oline

And you've never looked back ;-)