4 young oline on the very great power of sheer will

i'm not precisely sure what happened during the summer of 1995, what i read or saw, that temporarily left my journaling riddled with archaic phrasing and an overwrought sense of gravitas. but for approximately a three week period in july/august 1995, everything was life or death. even, apparently, sunday school. 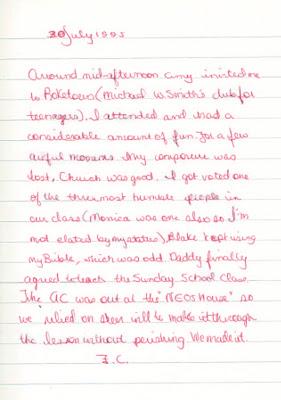 trans:
Around mid-afternoon Amy invited me to Rocketown (Michael W. Smith's club for teenagers). I attended and had a considerable amount of fun. For a few awful moments my composure was lost. Church was good. I got voted one of the most humble people in our class (Monica was one also so I'm not elated by my status). Blake kept using my Bible, which was odd. Daddy finally agreed to teach the Sunday School class. The AC was out at the "NEOS house" so we relied on sheer will to make it through the lesson without perishing. We made it.
F.C.
by oline

so why WAS blake using your bible?

i actually have no idea who blake was. my bible got around.

I would like to add to the list of reasons we are friends- you have been to "Michael W. Smith's club for teenagers." I am amazed.

you will also notice that i have a long, storied history of lost composure.