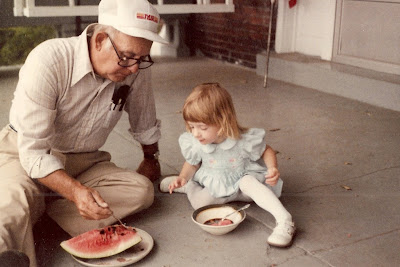 this weekend i'm retreating in wisconsin. which has absolutely nothing to do with my family but, because this is likely the only weekend out of the year where i will sit outdoors in a plastic chair doing nothing but savoring the feel of grass between my toes and the wind against my face, it inevitably reminds me of them nonetheless.

my family spent the entirety of the 1980s outdoors in plastic chairs and it is something i do so rarely now that i can't help but be nostalgic.

the memphis summer was so hot that the icing on my birthday cake melted on more than one occasion.

my mum let me go to the grocery store wearing nothing but a pink swimsuit with such frequency that the woman at the register took to calling me "piglet."

my father began work on a model of the titanic. i sat two chairs down from him at the dining room table while he dabbed oil paint onto the windows of each of the 840 staterooms and my mother periodically shouted threats against his life should he spill anything on the good lace table cloth, which- despite the fact that this exact routine was replayed nearly every night for nearly ten years- no one ever thought to remove.

i promptly took to carrying a box of round-up sugar sticks in the front pocket of my pinafores and would whip them out at random to puff like nobody's business. a five-year-old in a smocked dress faux-smoking sugar sticks. my parents were appropriately appalled.

on summer saturday evenings, my grandfather would buy a watermelon from the cart on cleveland and we would devour it. given strict instructions not to be "a priss," i let the juice drip down my dress, the seeds stuck to my knees. my gran sat on the porchswing swatting mosquitoes and sewing. she would rock back and forth, back and forth until dusk, when- because she was always furthest from the citronella candle, the scent of which made her eyes water- the fireflies would descend around her, their lights hitting the red in her hair and the red of the bricks in such a way that, for years after, i would take it for granted that she had magical powers and that those evenings were enchanted.

we all lived in memphis then, my parents and grandparents and aunt and i. we shared saturday afternoons and sunday suppers and summer vacations. it was a togetherness i'm quite sure we'll never experience again.

my mum booked our denmark trip. my gran remarked upon this the other night. she told me about their life in copenhagen and randers. about the loaves of bread "little debbie" would bring home, shells of crust with the warm insides eaten out. and the woman next door who didn't speak a word of english but always loved to trim her bangs. and then she wound her way back to the farm and the new pony and the very deafening quiet of their life there, a quiet that has begun to annoy her to no end.

which i do not want to hear because it breaks my heart, so i say, gran, do you remember our vacations? the ones with the van...

because my parents had matching skyhawks into which no more than 3 people could fit, when we went on family vacations, we'd pile into my grandfather's van. a van that, curiously, had no back seats so- in a move that was the single most hicktastic thing my family has ever done- we would pitch lawn chairs where the seats should be and go on our merry way.

remember how we would put you up on a pile of phone books and go on a great adventure? my grandmother asks. and i have to say no because i do not remember the phone books.

what i remember is the pair of us sitting in the very back of the van, my white plastic lawn chair with the white and green woven plastic seat pushed as close to hers as it would go so i could lay my head in her lap and sleep while her pencil scratched against the page of her word search puzzles and my mother sat reading with her feet in my father's lap and my grandfather, alone in the front seat, ate peanuts and hummed along to whatever classical music was playing on npr.

that is what i remember. and it was magical.
by oline