my mother grew up everywhere. in denmark. on the farm in mississippi. in memphis. in michigan.

due to this nomadicness, her earliest memories- as she relates them- always have a trippy, gothic, grimm's feel. it is unbearably hot or unspeakably cold. she's wearing twenty-five layers or none. she's in a one room apartment with her parents or abandoned on a farm. they are either impoverished or rolling in dough. it is almost always the end of the world. but then it never is.

one of my mum's biggest memories is of being a child on the farm in mississippi during tupelo's worst tornado. she vividly remembers the smell of the storm cellar. the other kids. the adults watching the funnel from the ramparts. the chattering. the wind. the thought that she would be orphaned. the very great fear.

all of which is very interesting because it took place seventeen years before my mother was born. something she pieced together recently, at which point this tornado- the worst in tupelo's history- began cropping up everywhere we look.

and of all the times i've heard this story- a story that wound its way up to memphis to be repeated as a cautionary tale during every storm in little girl oline's elementary years and a story that thoroughly undermined my faith in the science book that i nonetheless gripped ever tighter to my head as it was my only means of protection while i sat crouched on my knees, face pressed against the cafeteria's concrete walls, waiting out the wind- this storm has never sounded as scary as it does here, at the hand of good old elaine dundy: 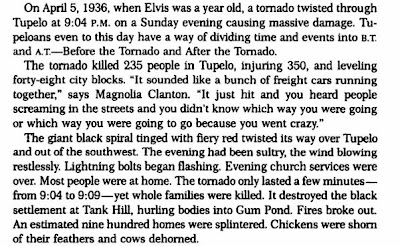 and clearly, clearly a 100-page textbook is going to be of tremendous protective value in an event where the wind forces are such that cows are dehorned.
by oline

Email ThisBlogThis!Share to TwitterShare to FacebookShare to Pinterest
filed under: elvi, little debbie, the family forward

Mom sent me an article from one of her Southern magazines on growing up a Southern Lady. I thought of you.

Do you remember the 2 days we spent in the hallways of CHS because of tornadic activity? I think it was junior year...

wasn't that when the big tornado went through downtown? i was turning pages for that one eyed ophthalmologist in fiddler on the roof and my parents thought it was too dangerous for me to leave the house so instead of going to opening night i stayed home and watched a princess diana documentary. possibly the one time my parents have wholeheartedly encouraged me to shirk a responsibility.

Yep, it was the downtown tornado. I grew up in the family that doesn't take tornadoes seriously. LOL. One went through Franklin when I was a little kid (probably around 7) and we sat on our back porch and watched it go down the street. LOL.

whereas i grew up in a house where every heavy rain augured the apocalypse and my mother would herd the whole family into the downstairs closet with the cats and dogs, where we would sit out the storm amid 5 gallons of water, 18 million AA batteries and all my sheet music yet, curiously (particularly given the frequency with which we were made to do this), no radio or flashlights.

You know what is hilarious? I've never once been herded into a closet or "safe spot" when we've had tornado warnings. Our thought was we would head there when it was at the neighbor's house. LOL.

ps. i love how on the day i wrote this, chicago is now due to experience a storm with 80 mph "hurricane-grade" winds.