(things you need to know before reading this:

in the fifth grade, before graduating to middle school, on a blue piece of construction paper cut into the shape of a star and laminated, we had to write in permanent marker what we wanted to be when we grew up.

an overly earnest child with a propensity for misapplying sunday school concepts to elementary school life and who, even at the age of nine, all too easily committed to things for forever, i mistakenly believed this to be a covenant. and that to fail at the mission outlined on my blue star would be to let down God.

nearly everything that has happened to me in the last twenty years can be traced back to that blue star.

because i cling to the things that make the least sense, the dream of being a vet lasted entirely longer than it ever should have, leading me to take a seminar on veterinary medicine at cornell, where i also took a russian class, which led me to mississippi state, where they had both a vet school and a russian department. a russian department that was abolished the semester after i arrived. when freshman chemistry kicked my ass, i happened to be taking an advanced comp class from a horrid professor who advised me to switch majors, which put me in the class of a university of chicago graduate, who recommended me for MAPH, which i got into, which is why i flew up to chicago for that weekend where i met jen even though i knew i'd never go for real, only i did. upon moving back to memphis after, i applied for a random sales job at a random magazine, where the publisher was a cornell graduate and, upon seeing i'd gone there, he gave me the job, and because i had that job, i was able to get out of memphis and move back to chicago and because i was back in chicago... well, you get the idea.

i say all of that so you will appreciate the exhaustion and the fear here as well as the astonishing smallness of the fact that sean cut his hair...) 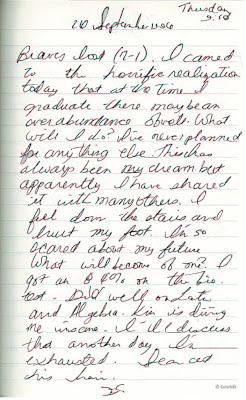 [translation: 26 September 1996, Thursday, 9:18- Braves lost (7-1). I came to the horrific realization today that at the time I graduate there may be an overbundance of vets. What will I do? I've never planned for anything else. This has always been my dream but apparently I have shared it with many others. I fell down the stairs and hurt my foot. I'm so scared about my future. What will become of me? I got an 84% on the bio. test. Did well on Latin and Algebra. Kim is driving me insane. I'll discuss that another day. I'm exhausted. Sean cut his hair.]
by oline

Ha! May I point out that you, too, were very specific with your date and times :-) And I love the sheer number of subjects you cover on one page. We would have been great friends, indeed.

I'm stuck on who Kim is... Sophomore year... And where the heck were you during Bio? I know Amy and I had it together... 1st period with Mr. Webb...

yes, why did we record times? as though our thoughts were so vital to the history of humanity that they would need to be pinned not just to a day but TO THE MINUTE. ah, the delusions of youth.

and meggie, i wasn't in your bio class. i was with a different teacher, with kj and the whole brat pack, much later in the day.

(oh, and let's dwell briefly on the fact that there is an entire season of my life where my journals begin with either the braves game score or statements like "a boring day, but the braves didn't play so i guess that's to be expected.")